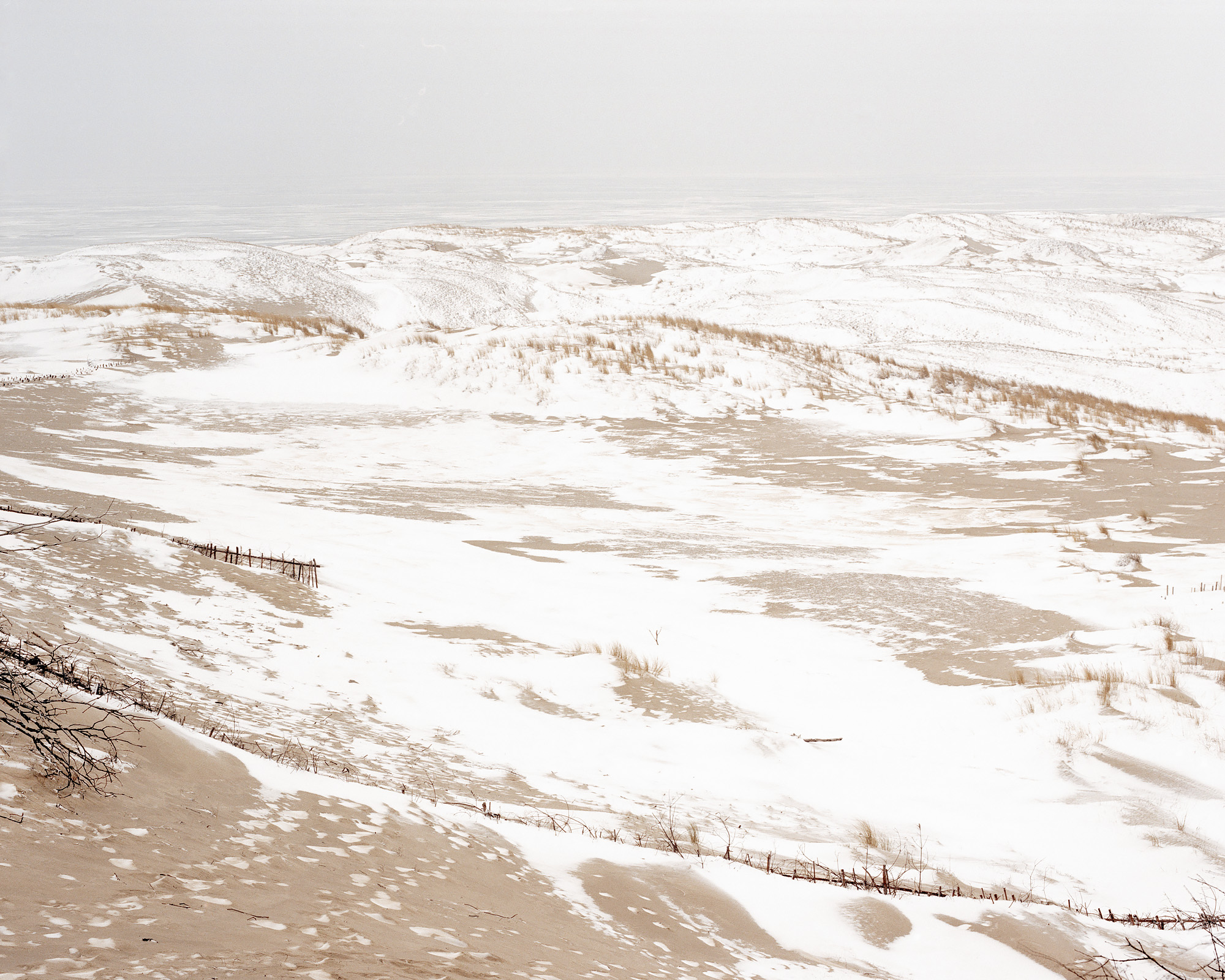 Between Two Shores: A Visual Love Letter to the Curonian Spit

The Curonian Spit is a unique and spectacular geographical formation, barely a mile wide across, that extends for over 60 miles from the coast of Lithuania into the Kaliningrad oblast of the Russian Federation. Formed almost 5,000 years ago by sand deposits washed there by the waves and gradually wooded over the years, the dunes, forests and small fishing villages of the spit are an irresistible draw for tourists; the region also contains several nature reserves. But with the Baltic Sea to its west and the freshwater Curonian Lagoon to its east, the spit is in constant danger of eroding and vanishing beneath the waves, meaning that regular conservation work has to be carried out and human activity is strictly restricted – heavy logging on the spit in the 18th century led to several settlements being completely buried by sand dunes. UNESCO inscribed the whole region on its World Heritage List in 2000, and on its website comments that “the Spit was formed by the sea, wind and human activity and continues to be shaped by them”.

While the northern half of the spit belongs to Lithuania, it’s distinct from the rest of the country not just geographically, but also in terms of its history. From the arrival of the Teutonic Knights in the 13th century onwards, the Spit was mostly German-ruled and German-populated throughout its history, despite a large Lithuanian minority. The northern part first came under Lithuanian control in 1923 following a coup in the nearby city of Klaipėda (Memel in German), just across the Curonian Lagoon from the spit. Its appeal to tourists had grown over the past decades, and in the early ’30s the Nobel-winning German writer Thomas Mann spent his summers in a house he constructed specially in the village of Nida. World War II saw the population make-up of the region change dramatically, with its German-speaking inhabitants vanishing almost completely, killed or forced to leave, and resulted in the Soviet Union extending its control over the whole of the spit. The Lithuanian half of the spit is now home to around 3,000 permanent residents, over 90% of them Lithuanian.

Lithuanian photographer Tadas Kazakevičius’s photo series Between Two Shores captures the peace and idiosyncrasy of the spit through his own pictures of the fauna and landscapes of the region, and atmospheric and even eerie images of local residents shot with their eyes closed and apparently listening.

His own photos are occasionally interspersed with archive images that remind us of the complex history of the Spit and the traditions and beliefs of its historical inhabitants, both Lithuanian and German. In particular, it includes fragments from a diary written by Elisabeth Pietsch, a German-speaking girl who once lived on the spit, containing poems about the nature of the region. Speaking about the project and his personal experiences of the spit in conversation with Deep Baltic, Tadas Kazakevičius talked about the experience of putting together Between Two Shores.

Although the photo series was putting together over a period of a little over a year starting in spring 2018, Kazakevičius had been visiting since he was a child, spending part of his summers there. “It always was somehow special and a bit sacred to me,” he says. “I suppose because it is a separate piece of land and to get to it you need to take a ferry, so in some sense it becomes an island-like place – some sort of isolated and different place, and straight away you get this different-world feel”.

He emphasises the region’s distinctiveness from the rest of the country, telling us that his previous project – a portrait of the Lithuanian countryside entitled Soon to Be Gone – did not include any photos from the Curonian Spit. “Somehow it feels different – but when you analyse its history it is totally clear, during the last centuries it was a mostly Prussian area and it has in some way a German feel to it. You almost feel in a Nordic country when you get there.”

The series alludes to the traditions and superstitions of the region, including a vintage photo of linden tree named Griekinė (meaning “the tree of sins” in Lithuanian) which once stood near Juodkrantė, one of the largest towns on the spit. According to folk tales, this was a place where people, especially girls, would confess their sins. “In some sense it was a place of repentance. Sadly in 1939 this tree was cut down.”

The spit has seen radical changes in the last few hundred years, and the changes have not only affected the human population. One picture is of a cormorant, which Kazakevičius refers to in a caption as “an alien bird”. He explains “what I mean about the alien birds is that cormorants happen to nest there and it was not typical for the place until some time ago, when they came and colonised some parts of forests there. In some sense this alien bird repeats the history of the place, as this specific place was repopulated after World War II.”

Talking about the decision to include pictures of Elisabeth Pietsch and of her diary, Kazakevičius told Deep Baltic, “on one of my trips there I came up with the idea of visiting local museums to learn some history about the place. I am always looking for artefacts to help to enrich the themes I work with and while visiting one I happened to find the diary/poem book of dear Elisabeth. I could not express my joy in understanding that it was her “love letter” to the place.”

“The poem book was full of wonderful poems dedicated to the nature of the Curonian Spit.” By incorporating pictures of Elisabeth and her poems and notes, he says, “I not only created a visual love letter from these people living there to the place, but I also had the opportunity to connect these feelings history-wise.”

When your treetops rustle tunefully

It cannot be exchanged for any music.

Even when the trees are being blown and

bent apart by the wind,

one can lie in your lap, at peace

Your valleys, your heights are so unique

One can walk for hours in your spaces

Without tiring of looking on your beauty.

Whoever chooses you as a place to live

How Lithuanians Conquered the World: The Case for a Migration Museum