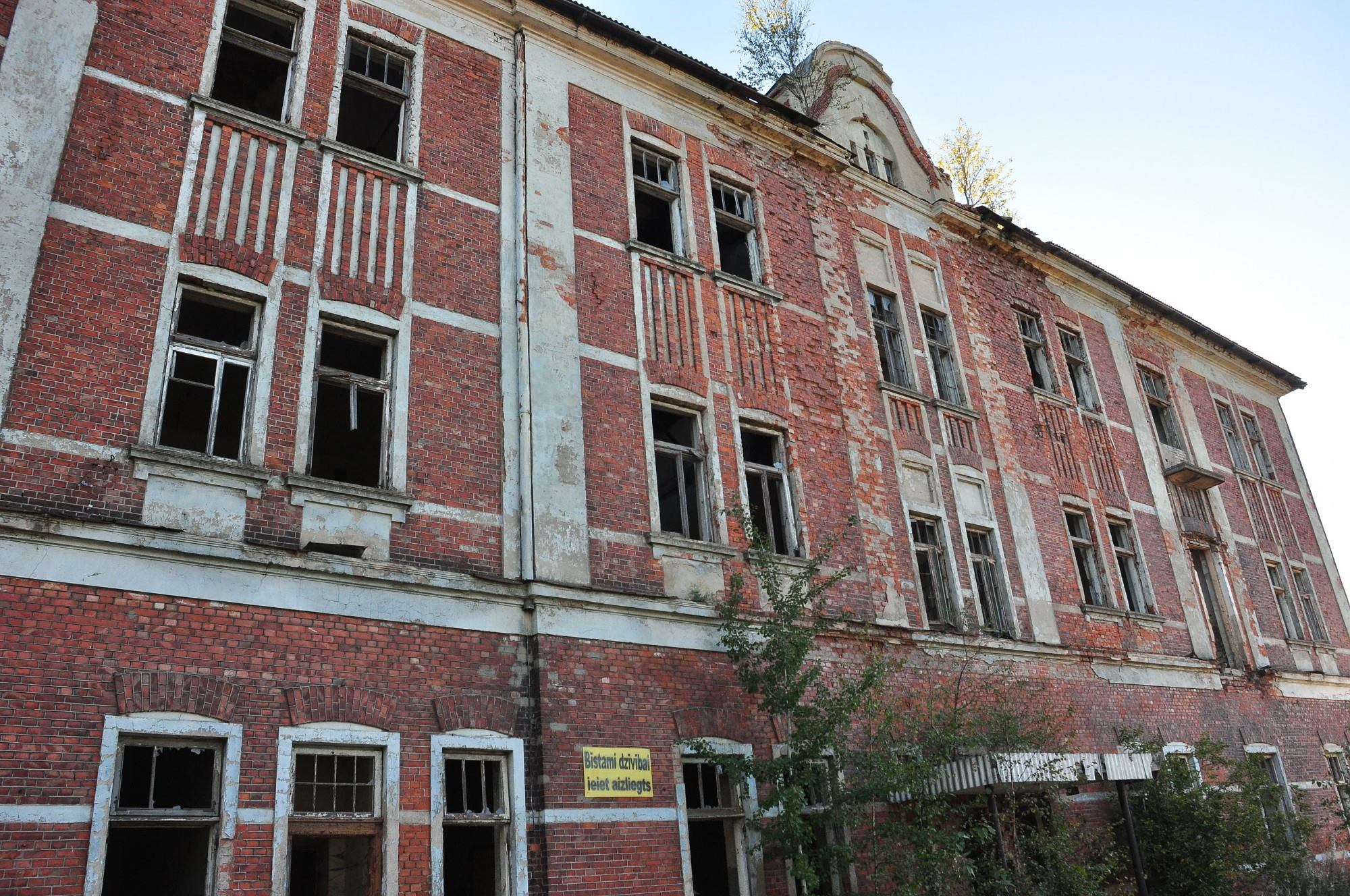 Final Point of the Russian Empire: Liepāja's Half a Million Emigrants

by Geoff Chester, LIEPĀJA
Flotes iela in Liepāja (meaning Fleet Street in Latvian) is a grim thoroughfare. The first road after a level crossing, the first street where the Tsarist-era industrial architecture of the central district makes way for Soviet era block houses of the outskirts, it is quite literally on the other side of the tracks. However, amongst them lies a ruin. A huge ruin. An abandoned building so completely out of place in its current surroundings that it begs the question: why on earth was it built here?
Its imposing (if decaying) façade has elements of Art Nouveau, the sturdy red brick walls suggest Tsarist origin (the city architects of the pre-revolutionary period, especially Max Bertschy, were huge fans of this material). Huge bay windows crowned with large balconies jut out onto the street.


If you ask any resident of Liepāja about this old building they will know: it’s Lielā emigrantu māja. Or for non-Latvian speakers, the Great Emigrants’ House. The answer reveals a fascinating history, one which seems so unexpected based on the provincialism of modern-day Liepāja, that it seems practically unfeasible. If you look at a map of Europe prior to the Great War, however, the city of Libau (the city’s German name, by which it was then officially known – also known to the Russians as Libava) is the westernmost point of the Russian Empire. It was the only permanently ice-free port on the Baltic that Russia controlled, and the terminus of the Libau-Romny railway. From this railway, grain from the the black earth of Ukraine, where Romny is located, was shipped to feed the industry of Northern Europe, and further afield, via Liepāja. Crucially for the story of this building, however, the railway line just happened to run through the Pale of Settlement.
The Pale of Settlement was a strip of land mostly made up of the land of the former Polish-Lithuanian commonwealth. It stretched from the Black Sea in the south, to Lithuania and the Latgale province of Latvia, (then the Vitebsk Governorate) in the north, and was the only part of the Russian Empire where Jews could live permanently. As a result, it had a huge Jewish population. A population with hugely restricted rights. A population regularly attacked in pogroms. And the desire of many among this population to emigrate is the very reason that Liepāja boomed as a port. Their destination: New York City. The most direct route from the western parts of the Russian empire to the United States of America was via this Baltic port. The route ran for only 8 years, from 1906-1914. Most of the records of passenger numbers have been lost, but we know that 18,000 people left in the first year of operation, and that figure rose to at least 56,500 passengers in 1907 (the population of Liepāja at this time was 81,000).


The number of emigrants departing annually gradually became larger than the population itself, and the vast majority of these people spent a while in the city while waiting for the next departure. At first the emigrants primarily stayed in private homes, whose cautious inhabitants were happy to earn an extra ruble or two. However, due to unsanitary conditions of the city, and a huge risk of infectious diseases caused both by the huge number of emigrants and the laissez-faire hospitality of the local inhabitants, on 12th March 1907, the city council demanded a minimal level of  hygiene, including the rooms being cleaned at least once a week, the walls being painted at least twice a year, fresh hay being used for beds, and only water from artesian wells being given to guests. Two years later, they restricted the practice of residents giving accommodation to emigrants altogether, and this was when the shipping companies began to erect their own quarters for their clients.

The building on Flotes iela was not the only emigrant house in Liepāja, and a much better maintained example stands barely 100 metres from the train station building, on the corner of Akmeņu and Baseina iela. However, as the structure especially built for the Russian East-Asian Steamship company, it was by far the largest. The function of these buildings was somewhere between a boarding house and vetting station, where zealous officials would make sure the passengers were healthy enough to travel and free of any diseases which would lead to them being sent directly back to Europe. Needless to say, they weren’t the most pleasant places to stay, and were mostly set aside for those unable to obtain the necessary travel and health documentation from their own pockets. Wealthier passengers who had all the relevant documentation were able to go directly from a specially constructed ‘emigrant train station’ (sadly no longer standing) to the waiting ocean liner.
In the eight years of emigration from Liepāja to New York, it can be assumed, according to the most conservative estimates, that over 500,000 people used the Russian-American line to reach the ‘Big Apple’. Based on this number, many millions of Americans have ancestors who passed through this unassuming Baltic port in search of a better life (most substantially, perhaps, a large part of the current Jewish, Lithuanian, Russian and Ukrainian populations of the USA).
It is sad to see the institutions that were used so intensively and represent such a specific window of time crumbling to dust (indeed, one wing of the building on Flotes iela was demolished 10 years ago). I’d love to see a museum of emigration in Liepāja, a European Ellis Island, a means to attract millions of people to this city, a way to capture and a reason to try to preserve a rapidly fading story. Sadly, the very people to whom this museum would be most important, are, unsurprisingly, far, far away. That being said, thankfully, due to the ubiquitousness of emigrants in Liepāja at the beginning of the century, the city is dotted with little reminders of them: an Orthodox Church on Rīgas iela, built there for passengers when the prayer room in the train station became too small; the old ticket office on the corner of Graudu iela and Kūrmājas prospekts, a grand building resembling a small chateau. The city museum, recognising the importance of and interest in this theme, are running an exhibition, “Liepāja-Halifax-New York”, which will continue until the end of March 2016, suggesting that this idea may well gain wider support. If this does happen, hopefully the walls of the Great Emigrants’ House will once again see  a fresh coat of paint.

Geoff Chester is a history buff and a proud resident of Liepāja.

Living in a State of Non-History: Growing Up Lithuanian-American

Forty Tatars in the Lithuanian Countryside: One Village's 600 Years of Islamic History