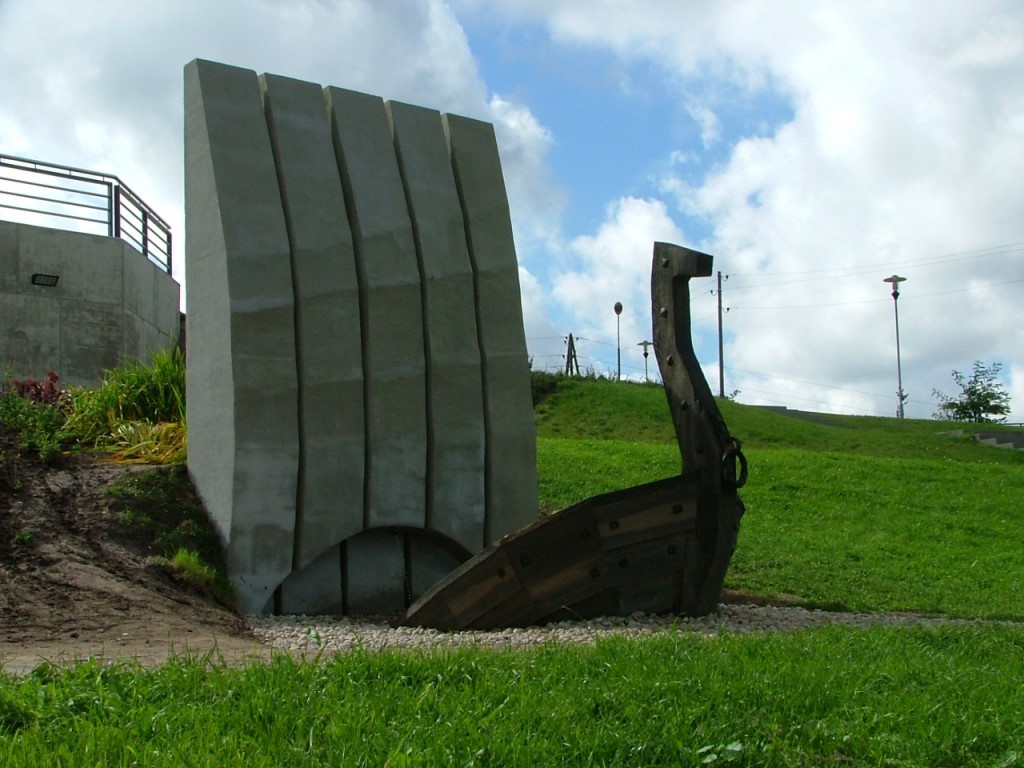 by Geoff Chester, GROBIŅA
Where the Vikings are mentioned in Europe, the reaction is rarely ambivalent. For some, the Icelandic sagas, and the voyages of Erik the Red and Lief Erikson spring to mind. For others, rape, pillage and plunder come to the fore. And of course, others will remember them as colonisers. The French mark them in their history books as the rulers of Normandy, the Russians and Ukrainians as the pioneer-founders of the Kievan Rus. In most cases, their exploits are as bloody as they are legendary.
For the historic residents of the west of Latvia, the Curonians, the Vikings were somewhere between plunderers and colonisers. It should come as no surprise that the Vikings were not the most accomodating neighbours. Surprisingly, the locals gave back as good as they got, and it is noted in the chronicles that together with their allies, the Oeselians (the historic residents of Saaremaa), they raided southern Sweden and generally harassed merchant vessels on the Baltic when the Scandinavian Viking warriors were off pillaging elsewhere. The legend of Seeburg is rooted in this past, and explains why the small town of Grobiņa, under another name, was a cultural and economic centre in the Eastern Baltic.
In around 650 AD, settlers from the (then-overpopulated) island of Gotland, right in the middle of the Baltic sea, made their way to the area now occupied by the town of Grobiņa in search of agricultural land. Back then, the Ālande river, which flows through present day Grobiņa, connected directly to the Baltic Sea through Lake Liepāja and the Līva river (now non-existent). They found an ideal defensive position, surrounded on three sides by the river, and thrived, living mostly in individual homesteads, based to the East of the Skabārža (Hornbeam) hill fort over an area of approximately 20 hectares.


If you visit Grobiņa nowadays, you will see almost no signs of the past settlement. The reason for this lies partly through the tendency of the Vikings and the Curonians to use wood for architecture, and equally due to their inclination to pillage any settlements that defied them. Over the 200 years of settlement the colony of Seeburg became the chief port of the Curonian lands, and the economic centre of the region. Their increased wealth and prestige bolstered hopes of greater autonomy. However, as the Chronicle Vita Ansgari describes:

‘ …a certain people named Cori [i.e. the inhabitants of Kurzeme/Courland] had in former time been in subjection to the Swedes, but had a long while since rebelled and refused to be in subjection. The Danes, being aware of this, at the time when the bishop had come into Swedish territory, collected a large number of ships, and proceeded to this country, eager to seize their goods and to subject them to themselves. Their kingdom contained five towns, When the inhabitants knew of their coming they gathered together and began to resist manfully and to defend their property. Having obtained the victory they massacred half the Danes and plundered their ships, obtaining from them gold and silver and much spoil. On hearing this, King Olaf and the Swedes, who wished to win for themselves the reputation that they could do what the Danes had not done, and because this people had formerly been subject to them, collected an immense army and proceeded to these parts. In the first instance they came to a town in their kingdom called Seeburg. This town, which contained seven thousand fighting men, they ravaged and despoiled and burnt. They left it with strengthened hopes and, having sent away their ships, set out on a five­ days journey arid hastened with savage intent to another of their towns called Aputra.’

After the Swedish sacking of Seeburg, the settlement never truly recovered its past influence, although it certainly remained an inhabited area. It lost any remaining significance it had held as a port in the 15th century when the mouth of the river Līva silted up. The old hill fort was occupied by the Curonians at the time of the arrival of the Livonian Order, and was promptly destroyed. A stone castle was built by the Germans in 1252, within spitting distance of the old fort, the ruins of which still stand by the river and lake. Grobiņa remained the administrative centre for the region until 1917, despite the rise of Liepāja, thanks to its medieval importance.

Although memories of the burial sites entered and remained in local folklore, the arrival of the Germans led to the reframing of the national myths about the contacts between the historic inhabitants of modern-day Latvia and their western neighbours. The foundation of Riga, more than 500 years later, in 1201, by Bishop Albert of Bremen became the defining event of these contacts, rather than Gotlandic farmers making their way to the coast of Kurzeme. Perhaps this may also have something to do with the adaptation of those colonists to the Curonian way of life as well as the relatively peaceful coexistence the locals and the new settlers enjoyed, demonstrated even 1300 years later by the local styles that the Gotlandians incorporated into their designs. It may also be due to the lack of any religious agenda on the part of the Gotlandian colonists.

Rather than any ancient ruins or rotted longships, the wealth of Grobiņa’s Viking heritage is completely undergound, in the Priediens, Smukumi, Porāni (Pūrāni) and Atkalni burial areas. The number of cemeteries and their contents reveal that Seeburg was an important urban centre between the 6th and 8th centuries, and the numerous finds in these graves show that it was far more than just a trading post. Whole families from Gotland settled here, rather than just traders and warriors. The only picture stone found outside Scandinavia, for instance, which dates from the 7th century, was found exactly here. For those interested in seeing what has been dug up, Liepāja Museum and the Latvian National History Museum have exhibits on the theme, as well as a safe home for many of the most fascinating artifacts.

These days Grobiņa doesn’t have much to set it apart from other Latvian towns other than its proximity to another urban centre, Liepāja. It mostly consists of low-rise wooden houses, with a run-of-the-mill whitewashed Lutheran church, a main street with supermarkets and independent shops, including a small cake shop, Ducis, which bakes what is (in my humble opinion) the most delicious honey cake in the region. A newly paved promenade with benches and picnic spots runs along the lakeside with beautiful views of the castle ruins and old hill fort. In order to draw attention to their unusual history, the local council has recently placed fences and information signs next to six specific sites, those included in the UNESCO list. Places that, mostly, if not specifically defined as such, would, in all honesty, be indistinguishable from the area around them, especially concerning the burial sites.

Enterprising townspeople have created an industry around their Viking heritage. Tourists can learn Viking fighting skills and take a trip in a Viking style boat across the castle lake, courtesy of the ‘Curonian Viking Settlement’ leisure centre. The architecture of the newly built open-air market next to the Livonian Order castle ruins reflects Grobiņa’s former significance as a port. The annual Seeburg Vikings’ city festival reflects local pride in their town’s heritage. Locally-made souvenirs, including magnets, T-shirts and even dominos, are sold in the town depicting cute child-friendly Vikings (an image that I’m not sure the Gotlandic/Curonian inhabitants would have agreed with).

Now old Seeburg has found its way into a proposed ‘Viking Age Sites in Northern Europe’ UNESCO heritage site list, together with multiple sites in Denmark, Germany, Iceland and Norway. Grobiņa’s ambitions to preserve its cultural heritage and promote it at a world level are admirable. If their efforts are successful, they will place this corner of Kurzeme in an enviable position in Latvia, as the only UNESCO world heritage site other than central Riga in the country (Kuldīga, and a specific section of the Daugava valley between Kraslava and Naujene are also vying for this honour). As a fan of and regular visitor to this humble but proud town, and a descendant of those wild, seafaring Curonians, I’m crossing my fingers for them.