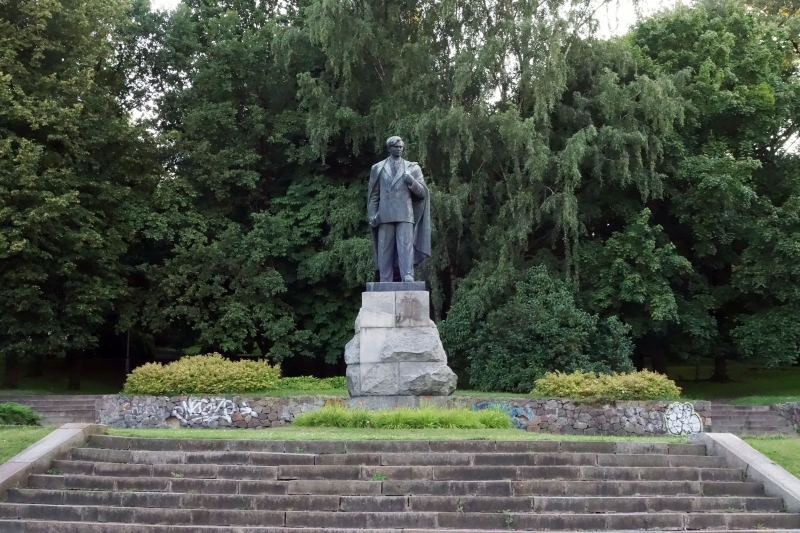 Petras Cvirka – the Lithuanian Writer Lionised by the Soviets

Last year, a new translation of the Lithuanian writer and socialist Petras Cvirka’s 1934 novel Frank Kruk came out. It is among his best-known works, the bizarre and comical story of a Lithuanian emigre to the US which satirised capitalism and American culture. Deep Baltic has an extract from the book, but first, translator Elizabeth Novickas puts the novel in context and tells us a little about Cvirka’s extraordinary life.


Petras Cvirka’s comic novel Frank Kruk, first published in 1934, is a long, leisurely novel (in two volumes) of the type written in the era before television was invented. The horrors of the First World War were already almost twenty years in the past, and Hitler’s war yet to come. It was a golden age for comic writing: P.G. Wodehouse, Stella Gibbons, and James Thurber spring to mind, and even Ilf & Petrov gamboled in the vast steppes of Russia.
In this debut novel, written when he was only twenty-five, Cvirka took aim at a subject that remains relevant in Lithuania to this day: emigration. In his story, the protagonist flees to America after a drunken fight results in a stabbing death. Various jobs, misadventures, and disappointments follow before the farmer’s son Pranas Krukelis completes his transformation into the successful businessman Frank Kruk and becomes the proprietor of a Brooklyn funeral parlor.
Emigration exerted an ambivalent attraction in the thirties (just as it does today, although contemporary writers are more likely to write about experiences in Britain and the EU than America). Although it presented opportunities unavailable at home, it also sometimes impoverished both those that risked it and those that stayed behind. Classics of Lithuanian literature include Antanas Vienuolis’s “Paskenduolė” (The Drowned Girl, 1933), about a pregnant girl whose boy has left for America; a creepy story from Antanas Tulys, “Paskutinis pasimatymas” (The Last Visit, 1936), about a Lithuanian-American who returns to his homeland and comes to believe his half-brother and mother are plotting to kill him so he won’t take over the family farm; and Vincas Krėvė’s story “Vis toji Amerika, kad ji prasmegtų” (Always that America, Let It Go to Hell, 1940), about the trouble one emigrant causes his old mother.
When Cvirka writes, “I believe the reader will allow us to wander off the beaten path and graze our Pegasus in the lush grass at the side of the road,” we find ourselves mostly agreeing that the grass is, indeed, pretty lush over there, and Cvirka is certainly taken to wandering. Cvirka had never been to America, so his New York is imaginary, constructed entirely from newspaper accounts, novels, and his encounters with ‘Americans’ who had returned to their motherland. Although Cvirka’s debts to writers like Dos Passos, Sinclair, and Lewis is obvious, his novel is more notable for its perspicacity than its minor inaccuracies. Kruk’s experience selling real estate with mortgages designed to sink the buyer echoed eerily in recent headlines regarding the mortgage crisis, even as it borrows from Sinclair’s The Jungle (1904). But Cvirka’s description of the services Kruk offers at his funeral parlor foreshadows the industry skewered by Jessica Mitford in The American Way of Death (1963).
Cvirka himself ended up as a ambivalent figure in the canon of Lithuanian literature. Born into a poor farming family in 1909, his tangled legacy forms a metaphor for all the paradoxes and complexities of the Soviet era in Eastern Europe.

He falls into the category of writers whose talents and idealism you can’t deny, but whose active involvement in supporting the Bolsheviks mars his current reputation. Like the poet Salomėja Nėris, he was part of the delegation that went to Moscow in 1940 to ask that Lithuania be accepted into the Soviet Union, an act many consider traitorous. He was widely lionized during the Soviet era, albeit posthumously. There is the postage stamp issued in honor of his 50th anniversary of his birth in 1959 (he hadn’t lived to see his 40th), the documentary films, the gushing volumes written about him as the ultimate social realist, the collected works, the numerous editions, and the many languages his works were translated into all over the Soviet Empire.
Unlike most Soviet heroes, however, his statue in Vilnius stands to this day, and at least ten towns have streets named after him. The museum of his birthplace is still open for tourists; his books, especially the early ones and those written for children, are still printed. Celebrations of his 100th birthday in 2009 included scholarly conferences and exhibits, and an award for literature is awarded every year in his name.
Cvirka’s death is just as controversial as his life. Biographies and essays frequently pass over his early death at the age of 38 without comment. The true story of his death will probably never be known, whether it was related to his previous digestive problems or the ingestion of poisonous mushrooms—which some say was the work of the secret police—or whether it was intentional neglect by the hospital he walked to in the middle of the night.

Cvirka mocked the broken Lithuanian of many Lithuanian-Americans by freely including LithEnglish words in his text. These have been indicated in the translation in italic, and, excepting a few minor corrections, retained Cvirka’s spelling. This vocabulary, however, caused problems for his readers in Lithuania. The Lithuanian-American vocabulary list was included in the 1949 edition of Frank Kruk and in all of its subsequent editions.
Lithuanian-American vocabulary
beisbolas  – baseball
bendas – band
bildingas – building
bomas – bum
bomeriauk – be a bum
bosas, bosai – boss, bosses
bučerninkas  — bucher
džėla – jail
Džysus Kraist – Jesus Christ
golfas – golf
karas – car
kreizi – crazy
mitingas – meeting
piknikas – picnic
saliūnai -saloons
susaidės – societies
Šiur – sure

The "New Russian Empire" and the Baltic States: an Interview with Agnia Grigas