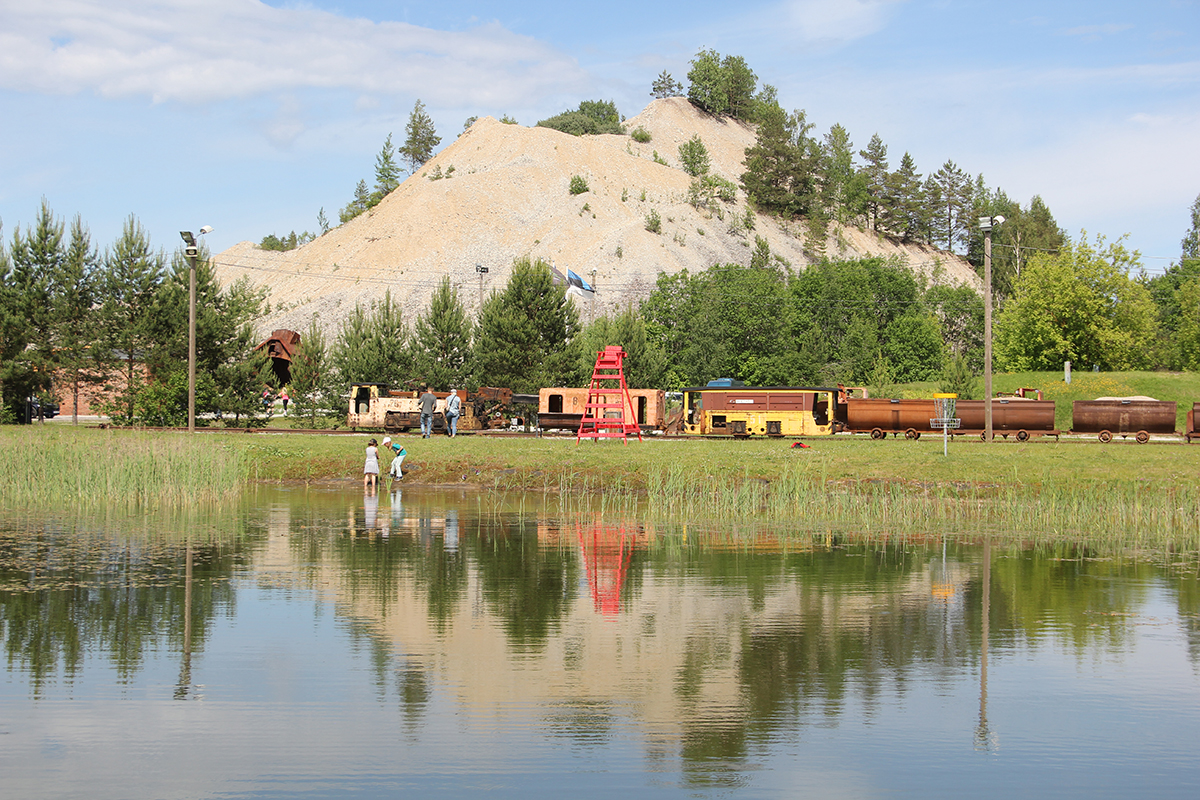 One has to come to Kohtla-Nõmme on purpose. It is not like Tartu, a town in which the city centre is on the way to the South. Or like Narva, where you unavoidably end up if going East. To come here, to this particular periphery of Estonia, you need a good reason – such as visiting the exhibition “Life in Decline” at the Estonian Mining Museum (from 17 June to 3 October 2021).

If coming by car from Tallinn, first you have to turn right, then right again, and, before entering into the centre of Järve (and while driving past different polluting factories, rotting infrastructure, Stalinist architecture, an Orthodox church and a Soviet house of culture), you turn right once more and go straight on until the corner where the museum is located.

The contemporary art exhibition “Life in Decline” is taking place in the former administrative building of the Estonia mine, the only one in which Estonian was the lingua franca during the Soviet times. The description at the entrance tells a Kafkaesque story of a time when a bunch of flies took over the building:

“As time went on, the old wooden administrative building grew too small – the entire mine was growing and the number of miners increasing… The new brick building erected in 1960 was much bigger and more presentable. Many everyday problems resolved once the move was complete; for instance, the new building had better showering facilities. The only negative aspect was the lack of a basement…

In the mid-1990s, a modern tin roof was built on the building. When the mine director went to see the bosses about changing the roof, they did not agree to the idea of an expensive roof. The director did not back down, the roof got changed and the costs were concealed. At AS Eesti Põlevkivi no one found out about the new roof and the problem solved itself.

The new roof produced a mysterious phenomenon: for unknown reasons, the attic became infested with fruit flies. There were so many that the windows on the third floor could not be opened. All sorts of things were tried to get rid of the insects – toxic sprays to replacing the insulation in the attic, but nothing helped. The fruit flies went away by themselves when the temperature fell below freezing.

The exhibition engages with the fragility of the things we construct, recognising that the world we inhabit is not just reserved for us to be used. In this area, open-pit industrial extraction started in 1919. Then, thousands of miners moved to the region, and a railway station and processing factories were rapidly built. Nowadays, everywhere you look you can find remains of infrastructural systems from the Soviet past, derelict sites that stand where heavy industry once flourished.

We have also tried to open up ‘decline’ in its multiple facets, paying special attention to the side-effects of modern extractive industries in eastern Estonia. That is why it made sense to organise this exhibition at the Mining Museum in Kohtla-Nõmme, in a region suffering from the harmful side-effects of a century of modern “progress” and from decades of political abandonment. In this sense, the exhibition is itself a research method and an intervention in the field, bringing people from elsewhere to the site, provoking further discussions on the topic and generating analytical knowledge.

Ten Estonian contemporary artists were invited to act as “accidental” anthropologists; they proved to be knowledge-makers themselves, able to produce highly valuable analytical knowledge through artworks. To prepare their contribution, they visited different places in eastern Estonia, spending time there, talking to people, observing things… As a result, their artworks do not simply function as conceptual or aesthetic objects, but also as anthropological artefacts – provoking further reactions and relations, making visitors think about current issues.

In this sense, we are approaching the exhibition not as an end-point, but as a research method and/or device. In this kind of anthropological curating, the field becomes a site of experimentation and co-creation, mutually transformative for all participants and without erasing the existing tensions and different agendas during the making process. Indeed, constructing common ground for working is one of the key challenges, one that makes room for diverse skills and interests to create something together – which requires generosity from the participants, and in some cases, unlearning our own epistemic tools.

In my case, as a curator, the exhibition allows me to lose control over the research while taking part in the production of things. This take on ethnographic work is interventionist and demands that the anthropologists be active participants in the construction of the field, not just observers. For instance, by building horizontal open-ended relations with epistemic partners (formerly treated just as providers of information). By doing that, we decentred the role of the ethnographer, redistributing roles, responsibilities and analytical capacity.

As a form of making, an exhibition is never the result of a unitary single work, but of multiple ongoing agencies and knowledges alongside. In many cases, it is difficult to understand who is acting and who is being acted upon. For instance, once back in Tallinn after the opening, I became a bystander of my own project and read this conversation on Facebook:

By using the exhibition as a research method, we aimed to understand what is going on in eastern Estonia. Here, decline has been more severe and long-term than in the rest of the country. The ground was affected by the intensive mining and extractive activity of Soviet modernisation. Then, industries were affected by post-socialist economic development since many were too large, used obsolete technology, or were of no interest to new global investors or the state. To this, we have to add a lasting stigmatisation from the national media, creating a sense of regional disposability and articulating exclusionary language.

Certainly, the situation is not as bad as in the late 1990s, but it is a fact that young people still emigrate from there, that unemployment and pollution are high, that apartment blocks are half-empty… These are statistics. And still, even when the numbers become more positive, hopefully soon, the anthropological consequences of decline will last longer. They are manifested, for instance, in hopelessness about the future and a sense of not belonging to the Estonian success story.

Because decline is also a cognitive phenomenon, not just a material one, having consequences beyond economic and demographic shrinkage. Seeing industries closing down, relatives moving abroad, young people suffering from alcoholism, stigmatisation, political abandonment… all that eventually affects our orientation towards the future and the way locals see institutions.

During the research process, we actively avoided easy explanatory binaries and stereotypes. By doing so, we learnt that that the region is composed of diverse “islands” that are interconnected, yet different from each other. There’s Narva, the historical and geopolitical centre; but also Kohtla-Järve; Sillamäe; Oru; north Peipsi; and Kiviõli; as well as the new administrative center, Jõhvi. They all are different from each other.

The participating artists made different issues visible with their works. For example, Sandra Kosorotova makes people aware of the plants that grow in exhausted ecologies in her work “Sore”. For her installation, Sandra transplanted several weeds found among the debris of mining, using “pots” found around the museum site. A weed refers to a plant that is not wanted in human-controlled settings. That’s the reason why the word “weed” is applied pejoratively, even though they manage to survive in unwelcoming and harsh environments; in this sense, it has also been applied to humans: the Nazis would speak of certain ethnicities as “weeds”. Because of her Russian background, the artist has often felt herself to be a “weed” in Estonia.

Another example of anthropological knowledge generated by the artists is the work from Jevgeni Zolotko, “Viivikonna Passages”. His installation creates a ghostly experience through the oral memories of Viivikonna residents and black-and-white photographs displayed in funerary showcases. This mining settlement was built by prisoners after World War II. During the 1970s, over two thousand inhabitants lived there; nowadays, we find barely a few dozen. In Viivikonna, the future is absent, and the past makes itself visible at every step – in the magnificent Stalinist architecture standing in ruin and the bushes growing in what were formerly roads.

In the same vein, Laura Kuusk engaged with the problem of the shrinking population by creating a photo-series with a choreographic real-estate agent, making the audience visualise both Soviet urban planning and market laws in relation to present socio-economic issues. For ten months, while working towards producing her artwork, Laura joined my research team, which is currently researching a pilot project which plans to demolish apartment houses and relocate local residents.

The work by Darja Popolitova, “ЭСТИМА КОДУМА” [the Estonian phrase Eestimaa kodumaa (“Estonia homeland”) rendered in Cyrillic], also involved field research and anthropological reflexivity. Specifically, she engages with the issue of language friction in the region and creates a fictional character, the witch Seraphita, who cures people from cultural hybridity.

My final example is the installation “Rescue Plan” by Varvara & Mar. This consists of two elements: a lifebuoy meant to float yet being half-sunk and a red chair similar to those used by lifeguards while keeping watch (here representing both authority and responsibility). On the chair, there is graffiti reproducing comments about the region found by the artists in the media, such as: “Money to me, waste to you”, “Oil shale fairy tale”, “Kohtla-Järve stinks”, “This is the Estonian Donbas”, “Become an entrepreneur”, etc. The site-specific installation makes visitors visualise the government’s failure to deploy working rescue strategies, as well as the negative representations associated with the region. Both aspects can indeed be upsetting to some, to the point that the work was vandalised twice.

This is an exhibition that appreciates accents and nuances, practising a decentred form of knowing, while connecting the micro and the macro. The different artworks bring up relevant questions, and the exhibition, as a whole, produces an empathic feeling in the visitor. So, besides the spectacular landscapes of eastern Estonia, you now have an artistic and an anthropological reason to visit Kohtla-Nõmme, before October 3rd 2021.

Francisco Martínez is an anthropologist dealing with contemporary issues of material culture through ethnographic experiments. In 2018, he was awarded with the Early Career Prize of the European Association of Social Anthropologists. Currently, he works as Associate Professor at Tallinn University and convenes the Collaboratory for Ethnographic Experimentation (EASA Network). Francisco has published two monographs – Ethnographic Experiments with Artists, Designers and Boundary Objects (UCL Press, 2021) and Remains of the Soviet Past in Estonia (UCL Press, 2018).

In Latvia’s “Egypt”: Photos on Lockdown in a Forgotten Borderland