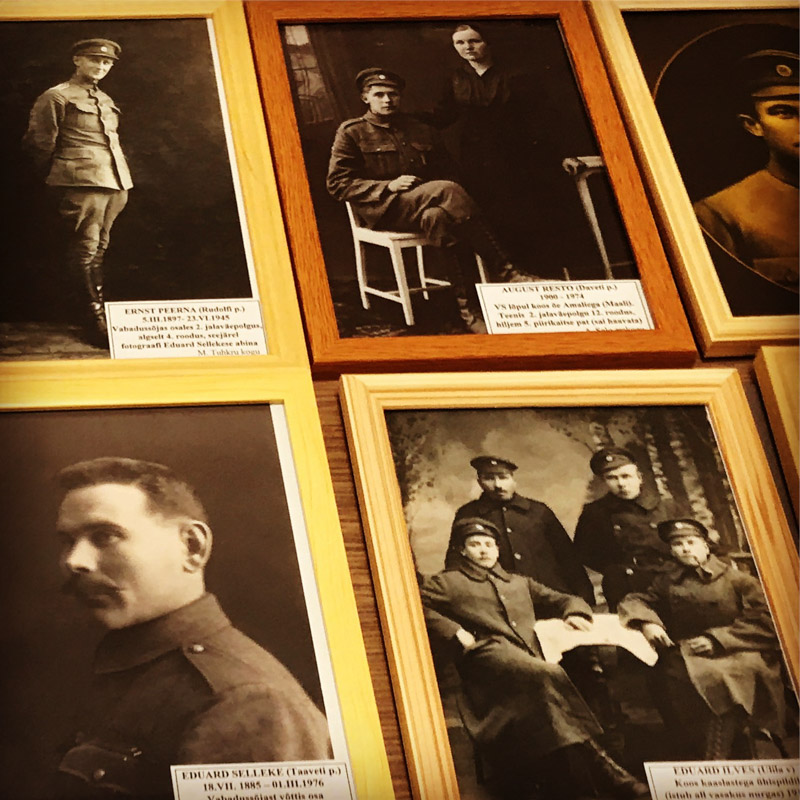 I find myself in a wintry town in south Estonia with half an hour to kill and decide to wander around the centre, my route guided by the least slippery pavements. It quickly becomes clear that it’s too dangerous for me to brave the icy streets. I start looking for somewhere interesting to get inside, preferably with a hot drink.

A little old lady peers at me with concern from a big picture window as I slip for the 17th time. I wander in through large double doors, hoping there might be somewhere to take refuge. It’s a small train station with a large waiting room.

Inside the waiting room are a dozen wooden chairs, mostly taken, public toilets, a vending machine with drinks that had probably been there for a hundred years and, intriguingly, a corridor marked Ateljee. I look up “Ateljee”, wondering if this was possibly someplace where someone might give me coffee, but Google Translate tells me no, it means studio. Like an artist’s atelier?

I peer down the corridor to see and there at the far end is a man peering back at me. He looks like an extra from a Monty Python movie and is holding an extravagant amount of fishing line. But he beckons me happily, come here, come here.

Of course I do.

The corridor leads to a large empty room, chairs stacked to the side. On the far wall is a collection of old photographs.

In Tallinn, I was embarrassed about learning to say things like “I don’t speak Estonian” and “Do you speak English?” for both formal and informal circumstances, because it was clear that really, they are just waiting for me to let them know what language I speak so that they can switch to it. It’s a relief for everyone if I just start off in English and get to the point. But here, English levels are low. Even the young people who I know must have recently learned it in school give me a deer-in-the-headlights look that says I didn’t know there was going to be a pop quiz!

So I’m finally grateful that I have learned these phrases. “I’m sorry,” I tell him in Estonian, “but I don’t speak Estonian.”

“Ei,” he says. He’s about my age, too old to have learned English as standard in school. He’ll probably speak very good Russian but of course that doesn’t help.

Out of habit, I say “Saksa keelt?” in case he speaks German, but it’s a mumbled addition: I’ve never met an Estonian who doesn’t speak English but does speak German. Until now.

“Ummm,” he says, an intense look of concentration on his face. “Saksa keelt.” He strides over to the photographs and says “Krieg.” The German word for war.

An interesting word to start with.

He starts to point at the photographs, which range from 1917 to 1925. The photographs show groups of young Estonian soldiers and he uses keywords to explain, while I try to fill in the blanks with the small Estonian captions on each picture. “Russian company.,” and then, a group of boys looking much the same, “Estonian, 2nd company.”

Luckily, having come to Estonia for the 100 years celebration, “Independence” and “freedom” are words I have learned. Estonia declared independence from Tsarist Russia in 1918 and I’m able to quickly make it clear that I understand what he’s trying to say: these photographs are before independence and these are after.

We go through the photos one by one while he tries to say something about each one. He’s clearly not spoken German in decades and can only throw keywords at me but they are surprisingly accurate ones: soldiers, battalions, trains, Siberia, murder. It seems like there must be a thread binding all these together, more than the war and the timing, but I’m damned if I can follow it. He shows me a funeral photograph, a baby-faced man lying on marble the caption showing that he lived from 1897–1918. Then we move on to photographs of a memorial, he says, and I realise that we’re looking at the original celebrations of Estonian freedom, a combination of flowers and flags and women in mourning, a combination of independence day and lest we forget.

In a way I’m glad that we don’t have a language in common because there is nothing that I could say that wouldn’t sound crass or, worse, dismissive. We stand for a moment, just staring at the photographs of these young men and women from a century ago. Then he waves me over to the window where there’s a collection of six photographs. These are portraits, grim-faced men staring down a camera in full military dress. I notice the dates on one, 1886 to 1945. “He died in the Second World War,” I say, sadly.

“Yes.” He points at each photograph and names a place. It doesn’t take long to work out that he is telling me where each man died. “Siberia. Latvia. Siberia. At home.” He points at another photograph. “His children.” I look blank. “His children came home. Not him.” It’s the first sentence he’s managed and it’s clear that these are not just a collection of old photographs to him. He knows each person, what they did and what they lost.

It’s impossible not to be touched. All these fresh-faced men posing for the camera. All the war and the violence that they were subjected to. All of the families left behind.

My grandfather, who was like a father to me, fought in the war, lost his leg on the Russian front when he was 18, cut off in a field hospital for fear of gangrene, and was sent back home while the war was still raging on all sides. He would never really recover from the experience. He had no love for the veteran’s events and war films, no patience with the glorification of fighting for one’s country. It was a dirty, messy business, he told me, full of mud and shit and blood.

I wonder how he’d feel to have his photograph hung in a small room in a small village. No heroes, no glory, nothing but a black-and-white photograph and a three line caption. I think he would see it as appropriate. Somehow, this display has affected me more than all the statues I’ve seen in city centres all over the world, names carved in marble.

I glance at my watch and the man notices, for which I feel bad. “One more,” he says and takes me to a side nook with another set of photographs on the wall. The framed images here aren’t visible until you are fully in the room and there’s a table in front of them with more photographs, presumably still to be hung, and the man’s backpack with manila envelopes spilling out. I go to look.

“My grandfather,” he says, showing me a serious-looking man with porcelain skin and perfect hair. “And this man here…” it takes some time to make it through the familial relationship but they are both of his grandfathers, one on his father’s side and one on his mother’s. I am surprised that they don’t get pride of place but he shakes his head. “This is my hobby,” he tells me. “Photographs. Military.”

A few times he stumbles because he can’t find the right word for the unit or the type of military, and I don’t like to tell him that I can’t actually tell a battalion from a brigade.

He wants to get it right, it doesn’t matter if I know the difference or not. He points at a photograph and tells me the exact regiment and company and then another one showing a bunch of men in a field with bicycles and horses. “Picnic.” He smiles.

He points at the parking lot. “Someone waiting?”

“I have time,” I tell him. The truth is, I don’t, but I don’t want to rush him. He starts picking up the photographs on the table. “Hey, a woman,” I say happily, somewhat unfairly as the memorial photographs and the parade also had women in them. But all the portraits have been men until this one.

“My mother,” he says. “My mother and her brother. My uncle.”

“I learned in school,” he tells me, as I’d suspected. I also suspect he’s not needed to use it since, so it’s probably been 30 years since he’s tried to put a sentence together. I’m stunned and flattered that he’s making the effort.

He pulls out one of the manila envelopes spilling out of his backpack, opens it up and rifles through a stack of photographs. “Here is the school,” he says. There’s a number of them dated around 1922, showing the school from afar and up close, an ageless shot of girls sitting on the grass grinning at the camera, a sports field.

And now I really do have to go. “This is wonderful,” I tell him, and then, summoning my courage. “Can I take a picture with my phone?” He nods and smiles, proud of his display. I take a photo of the table, wanting to capture the one of his mother. Then I point at the main collection on the wall. “And there?”

And I ask the question I wanted to ask in the first place. “And of you? Will you stand there?”

He gives me an embarrassed smile but does as I ask, standing in front of the photographs. His face is stern, much like the soldiers, it’s clearly unbecoming to smile for the camera. I take the picture and thank him again, in English, accidentally, and then in German and once more in Estonian.

“You go,” he says, shooing me away, smiling again once I’ve stopped taking pictures.

“I have to,” I say. I’ll probably never be here again but I’m glad I have the photographs, something to remember him by. To remember this moment of being touched by Estonian history, a collection of old photographs curated by a man who stands alone in a big empty room, hoping for someone to walk in and ask. A memorial of dozens of young Estonians on the brink of independence, just to lose it all again twenty years later.

I never knew much about the young Estonian men who fought in the First World War. And now I will never forget.

Sylvia Spruck Wrigley obsessively writes letters to her mother, her adult daughter, her accountant, as well as to unknown beings in outer space. Only her mother admits to reading them. Born in Heidelberg, Sylvia spent her childhood in California and now lives in Estonia. You can receive more of her stories about Estonia in your inbox by signing up to her brand new free mailing list at https://sylviawrigley.substack.com/

Red Courland: A Guide to the Revolutionary Relics of Kuldīga