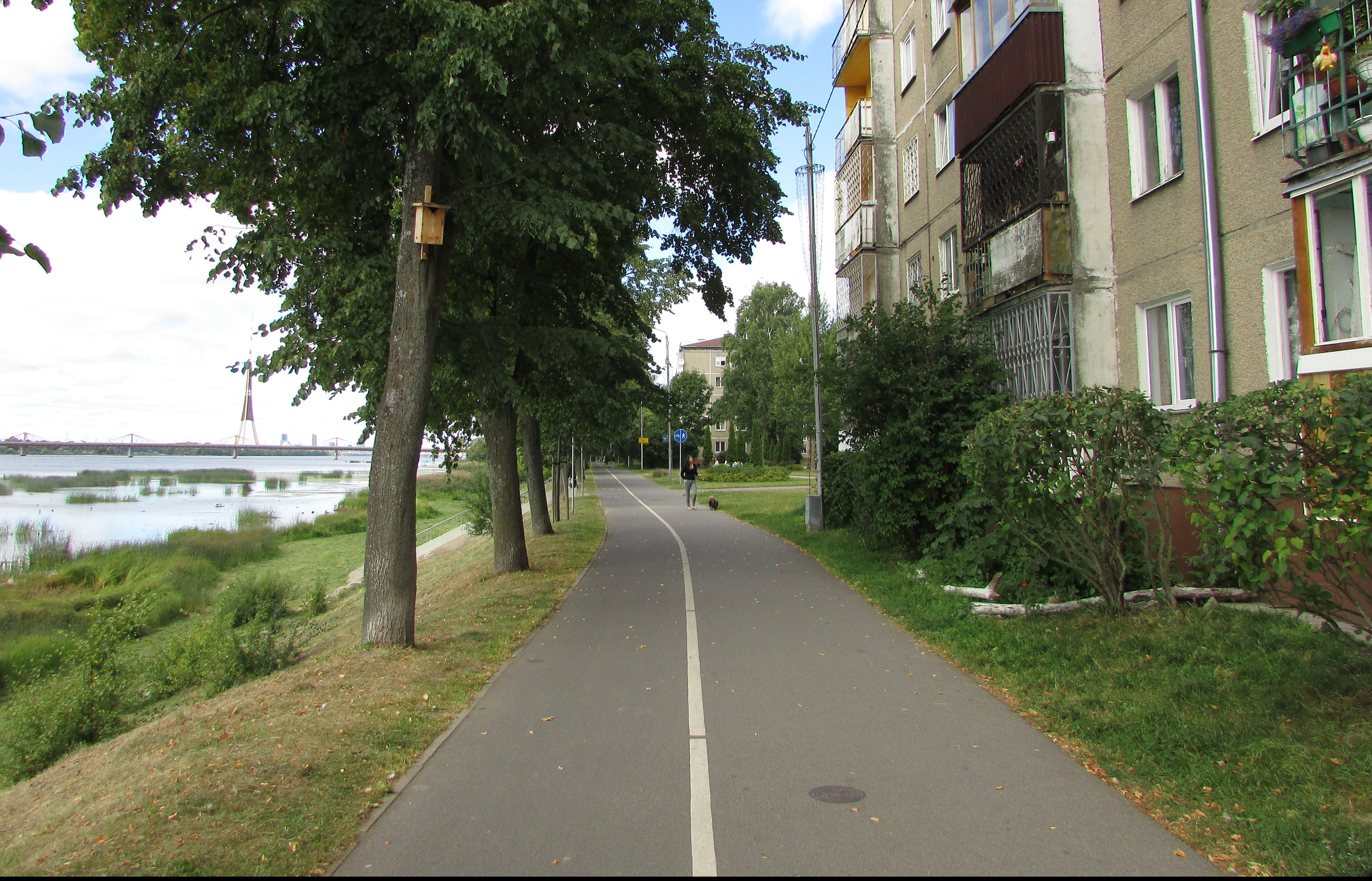 by Maximilian Matthews, RIGA
Very few, if any, visitors to Riga venture out as far as the Ķengarags neighbourhood, one of the city’s southern suburbs. This is not surprising, as most of the area consists of blocks of flats built in the early years of the Soviet occupation. The name Ķengarags was first recorded at the end of the sixteenth century. At this time it did not refer to all the present area, but just the riparian area. The name comes from a local landowner, Ķenga, who lived where the Daugava made a hornlike bend (‘rags’ means horn). Since those days the river shape has been altered by engineering, flood improvements and the Dole Hydroelectric Dam which was opened in 1976.
Although there is no reliable information about the oldest population in the area, it is conjectured that the rivulets and small islands which covered this area after the last Ice Age would have been suitable for fishing and migrating reindeer hunter settlements.
The Promenade
Unlike most other Riga neighbourhoods, nineteenth-century Kengarags was very industrial and was never blessed with a park where the local people could go for recreation. Instead they walked along the river. Daugava promenade was established in 1901 as a dam, which strengthened the Daugava riverbank. It was built of stone and wood piles to protect the surrounding farm land during spring flooding. It was well-maintained and later strengthened with concrete. In 2012 the promenade was completed renovated with a new surface, lighting, a bicycle path and other features that we will meet as we take our walk.

From the South Bridge to Ķengaraga iela
The walk begins by the Dienvidu tilts (the South Bridge), which was opened in 2008. It is 0.803 kilometres long and cost 624.7 million lats which makes it (for its length) the most expensive bridge in the world. In a few minutes we reach Ķengaraga iela which was so named in 1923 – previously it was known as Kišiņevas. On the corner is the University of Latvia’s Solid State Physics Centre.
There was excitement here on May 19, 1979 when a Soviet MiG-21 hit a bird and crash-landed into the river. The pilots managed to eject, but the wind carried them over the street and one of them landed near a stall selling drinks. The aircraft was recovered some two weeks later.
From Ķengaraga to Kaņiera iela

Kaņiera iela, formerly known as Mazā Ķengaraga, received its present name (a lake to the west of Riga, near Jūrmala) in 1957. Kaņiera 17, which faces the river, was built in 1880 and is on the site of a previous house that dated from the early 1600s. It was here that the Russian raft-barges used to anchor while waiting for local pilots to guide them to the estuary. There used to be anchor posts here dating back to 1610; however, these were removed towards the end of the nineteenth century.

The building in the picture (dated about 1900) shows the house (built 1880) before Dāvids Zariņš restored it in 1935.
From Kaņiera iela to Elles Dīķis

We now pass the end of Glūdas iela which is named after the blue-grey clay found in the area. The street was first mentioned in 1889 when it was named after the Daugava. The name was changed in 1923. Glūdas 1, designed by Sergey Antonov in 1939, which faces the river, is on the site where in 1927 Mārtiņš Gulbis established the first greenhouse factory in the Baltic States.

This section of the river is a popular stretch for fishermen, who are often seen up to their waist in the water trying to catch the best fish – especially when the Dole Hydroelectric dam gates are open.

For those more interested in terrestrial pastimes there is a recreational area with chess and table tennis tables (installed in 2012). Latvians are very fond of chess and the city had produced some fine players including Mihails Tals (1936-1992), “The magician from Riga”, who became world champion in 1960 – at the time the youngest ever world champion.

There is also a fine bicycle sculpture which was made by Āris Smildzers and Guntis Pandars in 2010, as well as benches if you just want to watch the world go by or read.

The origin of Elles Dīķis (Hell’s Pond) is not really known. First recorded on a map in 1668, it could be the result of clay mining, an old mill pond or even a sinkhole. Whatever the origin, it is very popular especially in winter when it freezes over and the locals play hockey on it.

By the pond is a specially designed bench which carries a dedication to the Gama Company who helped pay for the improvements to the promenade.

Near the pond is the Daugava River jetty which, according to legend, was built in the war for launching amphibian vehicles. Local residents used it as a boat dock until 1993, when it began to disintegrate. It has recently been strengthened and is a popular place to feed the ducks and swans that nest nearby.

From Elles Dīķis to the bird observation tower

We now pass the now abandoned Baltic India Rubber Company factory. Founded in 1924, the company produced rubber footwear as well as other rubber products such as car and bicycle tyres. By the mid-30s it was the largest rubber factory in Latvia, selling its products all over the world. During the Soviet occupation it was renamed ‘Sarkanais kvadrāts (The Red Square).

The back wall of the factory, facing the river, has been delightfully painted by local schoolchildren.

As we carry on we pass Kvadrāta iela, a rural-like horseshoe-shaped street that seems to have been teleported here from the country. Soon we reach the new pedestrian bridge that was designed by Artūrs Catūrovs. Built out of locally produced fibreglass, it was opened in August 2011.

The bird observation tower, designed by Uldis Liepa and Artūrs Catūrovs, was erected in 2011. This is the second tower built in Riga and the first overlooking the Daugava. In the course of a year, Latvia is host to over 250 bird species and from the two platforms ornithologists have spotted over 50 types of birds, mainly during the spring and summer migrations, but there are about 20 species that are to be seen year round. Birds which nest on the shallow bank include the great crested glebes, coots, mute swans and mallard ducks. The area is also a popular feeding ground for other birds that nest elsewhere, such as swallows, martins and swifts.
This brings us to the end of the official promenade, but if we walk on a kilometre or so we come to Mazjumpravmuiža.
Mazjumpravmuiža

Mazjumpravmuiža is one of the oldest estates in the Riga area. The first record concerning the manor dates from 1259, when the land was obtained by Cistercian nuns. Until about the 17th century the manor was officially called Blūmendāli, but most people referred to it as Jumpravmuiža (in reference to the nuns). During the Middle Ages one of the three ferries across the Daugava was located here.

Around 1600, the manor became the property of the Jesuits who in 1636 sold it to the city of Riga for about seven thousand thalers. In the 19th century the house was occupied by the painter Johann Heinrich Baumann, father of Johann Friedrich Baumann, the first Latvian architect.

After the Second World War the manor territory was taken over by the Soviet Army, and the manor house used as a clinic. Sadly, the house was left to fall into disrepair and now there are only ruins.

Maximilian Matthews runs the Facebook page Roaming Round Riga, which takes both a historical and contemporary view of the wonderful city that is Riga. Most of the posts are adapted from his popular topographical CD-ROM ‘Roaming Round Riga’. First published in 2005, it is is updated every year.

How the Baltic States Got Their Shapes