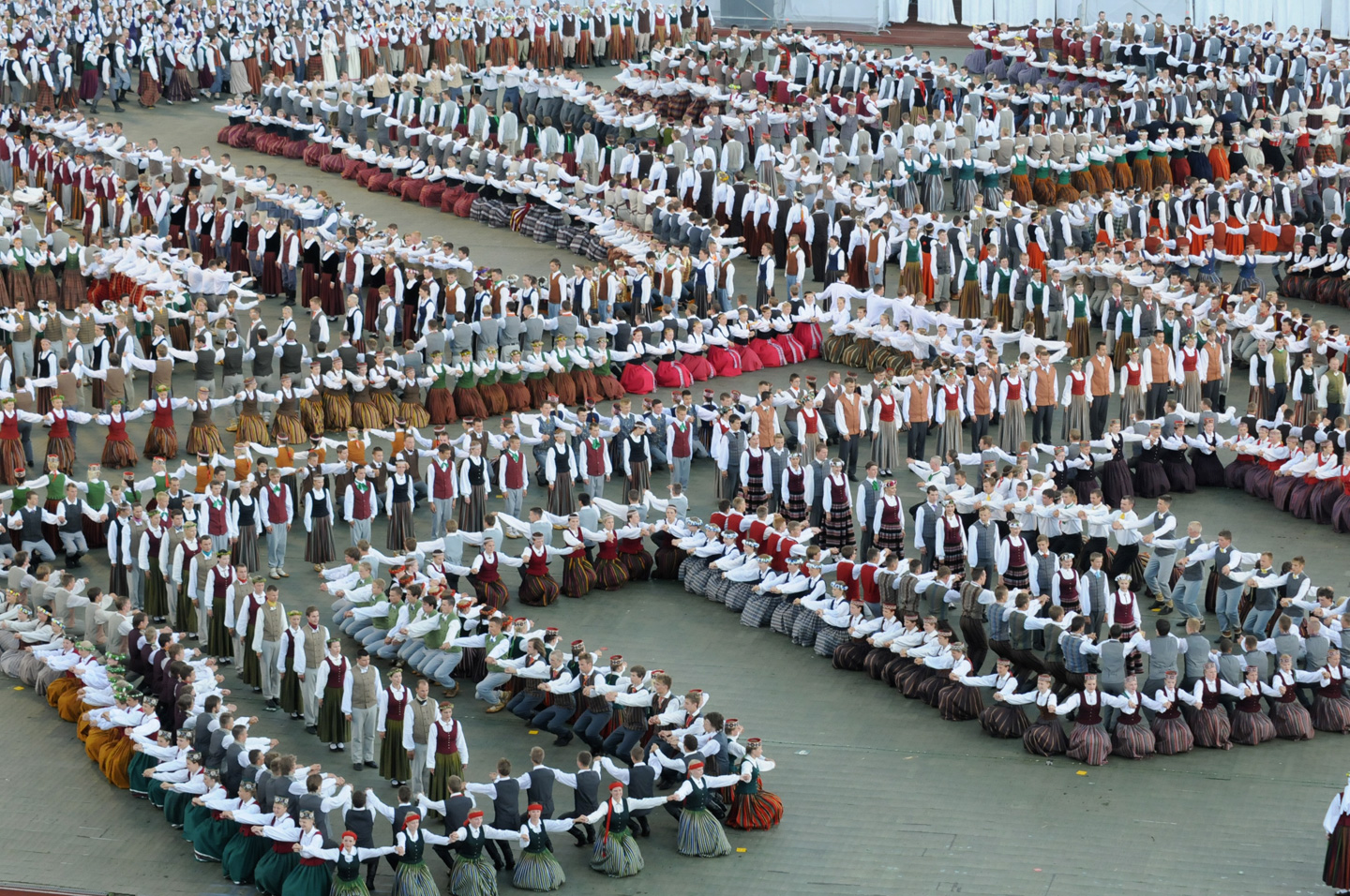 One of the more interesting and unusual Baltic-related sites of recent years has been Imaginary Latvians, started in 2014, a Medium-based project to compile as many references to Latvians in literature and film as possible, and which now has dozens of entries from all over the world. Examples range from imaginary “beautiful, proud and pitiless” witches to imaginary itinerant old men who give out cheques for thousands of dollars, to imaginary mice in Disney films.
Latvian-American Rihards Kalniņš, the chief seeker of imaginary Latvians, recently spoke to Deep Baltic about what he has learnt from the project.

Where did the idea for Imaginary Latvians come from?
I’ve always been amused to find Latvian characters in fiction or film. They always seem to just pop up when you least expect it. So I decided to really look hard for them and compile all the imaginary Latvians I found in one place – to create a definitive compendium of Latvians in fiction. It’s a work in progress…but my aim is to collect them all! To collect all of the imaginary Latvians ever to appear in world literature.
So far, I’ve found nearly 100 imaginary Latvians. There are about two million “real” Latvians living in Latvia, and a couple more million Latvians living abroad. So that’s not a bad ratio.
To me, fictional characters are just as full-fledged people as real human beings. So by plucking imaginary Latvians from the pages of world literature and compiling them on my site, I like to think I’m doing my part in increasing the world’s population of Latvians.
[youtube https://www.youtube.com/watch?v=Kcos7xVma4U&w=560&h=315]
Latvian mouse from 0:40
Why the focus on fiction in specific, rather than simply mentions of Latvia in the world press?
I’m a big reader. I love fiction. So I’m naturally more interested in searching for Latvians in works of literature. Plus, many Latvians have the impression that the only “fictional Latvians” are bad guys in action movies: thugs, prison guards, gangsters…or worse. I wanted to set out and disprove this, to show that imaginary Latvians run the gamut of characters and character types.
Also, I think that people should read more fiction. It’s good for you.

What was the impression you got of the world’s view of Latvians? Are there any characteristics or features that seem to recur?
Imaginary Latvians – and I’ve found them in works by writers from all over the world – come in all shapes and sizes. Just like real Latvians! On the site, you’ll find everything from Latvian taxi drivers in New York City to Latvian painters living in the Australian Outback. I don’t think there is one definitive type. That’s the beauty of it. You never know what an imaginary Latvian will look like.
I’m constantly amazed to discover an imaginary Latvian that some writer has conjured up. I mean, in his novel Bleeding Edge, the legendary Thomas Pynchon writes about “a forlorn trio of Pārdaugava mini-mobsters semiconsciously collapsed in a doorway.” [Pārdaugava is how the districts of Riga across the River Daugava from the city centre are collectively known]. How did Pynchon come up with that one? And the great Texas novelist Larry McMurtry (author of Lonesome Dove, one of my favorite novels) writes about a Latvian refugee who makes sculptures out of bread, which “evidently represented the eternal feminine, being a mixture of lumps and indentations.” Incredible.

What kind of reactions have you had to the site? Have those from Latvians been different from non-Latvians?

Very positive. Some people have sent in their own findings, which I’ve incorporated in the site. It seems that most of the people following the site – and sending in their findings – are Latvians who live abroad, particularly Latvian-Americans like myself. We tend to have “imaginary Latvians” on our radar, though.

Characters are almost always fairly peripheral – generally not even supporting figures but ones who turn up extremely briefly in the background. Why do you think this is?


Yes, that’s the beauty of it! Imaginary Latvians always seem to make “cameo appearances,” popping up when you least expect it. I’ve always thought that peripheral figures are the most interesting characters in a work of fiction. The peripheral figures, at the margins of the narrative, are the ones that give a work of literature its color and depth.
But there are a few Latvians in leading roles, like Ian Fleming’s character Goldfinger, who was actually a refugee from Riga. Or the Latvian gentleman who invented a machine “capable of disintegrating any object placed within its sphere of influence,” in Arthur Conan Doyle’s story “The Disintegration Machine.” Or, of course, the eponymous Latvian con man in George Simenon’s Pietr the Latvian.

What is your favorite example? Why?
My favorite examples are the imaginary Latvians in works by my all-time favorite writers: Don DeLillo, David Foster Wallace, Philip Roth, John Updike, and Richard Ford. It blows my mind that each of those guys wrote about Latvians in their novels. Don DeLillo has included Latvians in his work three (!) times so far: an old Latvian woman who walks “down the stairs backwards”; a Latvian “strength coach”; and a Latvian tennis player “groaning erotically with each fierce return.”
I always wonder where these writers got the impulse to include a Latvian character in their work. Perhaps while working on the book they met a Latvian on a train, or sat next to one on an airplane, and decided to make one of the characters a Latvian? Maybe a favorite childhood friend was Latvian? Who knows?
The site also includes lots of imaginary Latvians that provide amazing insight into what their creators think about Latvians and the Latvian psyche. For example, in James Church’s 2010 novel The Man with the Baltic Stare, a character says: “I was in Riga once. Talk about fog! I couldn’t see my hand in front of my face. … No wonder people look like they’re staring into nothing.” And in Dave Eggers’s 2002 work You Shall Know Our Velocity!, a character observes that Latvians all walk fast, wear black, and have a penchant for fur because “[t]hey are expressing their inner darkness. Their gloom. … The Latvians, many believe, cover themselves in large coats and furs because they want to disappear.”
I’m also fascinated by some of the imaginary Latvians I’ve found in nineteenth century literature. For example, a novel called Livonian Tales by Lady Elizabeth Rigby Eastlake, an English noblewoman who traveled extensively in the Livonian region in the late nineteenth century. Her 1861 book has a wonderful account of a “Lettish summer wedding feast,” which describes in great detail each of the dishes they ate – it sounds almost like a restaurant review – as well as lengthy character study of a “Lettish peasant,” a man who had “the sound moral feeling, the plain strong sense, the noble patient courage, and the sweet gentle temper, which, even under the cruellest want and oppression, are never quite obliterated from the Livonian breast.”

Are there any you were particularly unimpressed by, due to inaccuracy or any other reason?
As a general rule I try to avoid nasty imaginary Latvians – irredeemable bad guys. I’ve found lots of them in literature and film, but choose not to include them on the site. I only include characters I’d actually like to meet in real life.


How do you source your examples?

I read a lot, keep my ear to the ground. As I said, imaginary Latvians are on my radar.
Also, friends and acquaintances have pointed me in the direction of more than a few imaginary Latvians. Followers on Facebook and Twitter from all over the world have told me about some of their favorite Latvian characters, which I’m always incredibly happy to include on the site. Keep ‘em coming!
For me, getting tips about imaginary Latvians in works of literature by writers I’d never heard of before has been a great added bonus of this project. I’ve been introduced to lots of new authors and novels.
What do you do aside from Imaginary Latvians?
I’m a business development manager at a language technology company in Riga.


Would a project focusing on larger and better-known countries – for example, Imaginary Americans or Imaginary Russians – bring up different results, do you think?
Of course. But novels are just packed with imaginary Americans, Russians, Germans, British, etc. Imaginary Latvians are more elusive, harder to find – they’re a rarer breed. A more exotic species, in my opinion. So when you find one, it’s infinitely more rewarding.

Do you generally get the sense that writers know much about Latvia itself?
I definitely get the sense that some of these writers have done their homework. I’d like to believe many of them have heard about Latvia from their Latvian friends, neighbors, and casual acquaintances. In the US, where I’m from, I’ve always gotten the impression that everybody knows at least one token Latvian. And Latvian-Americans in particular just love to talk to people about Latvia – its history, culture, unique traits, and great athletes and musicians. Apparently these stories have left an impression on the world’s novelists. Let’s keep up the good work.

Header image – non-imaginary Latvians celebrating the Song and Dance Festival, Riga [Credit: visisvetki.lv]
You can also follow Imaginary Latvians on Facebook and Twitter.
© Deep Baltic 2016. All rights reserved.
Like what Deep Baltic does? Please consider making a monthly donation – help support our writers and in-depth coverage of Estonia, Latvia and Lithuania. Find out more at our Patreon page.

From Memel to Klaipėda: the Lithuania Minor Revolt 94 Years On

Europe's Dark Side of the Moon – Life in '80s Riga