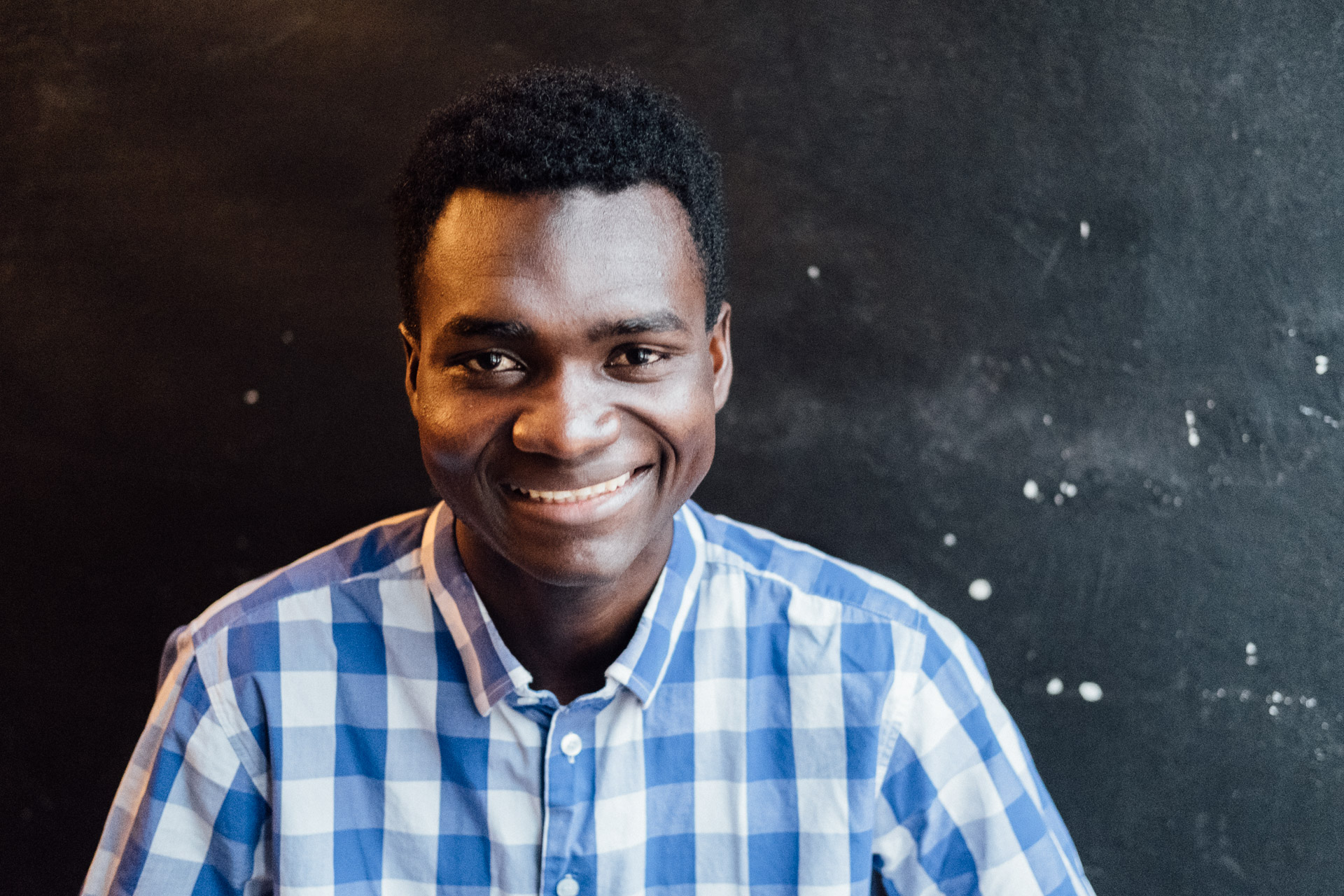 "I Want To Stay Here": A Chat with Gambian Jallo in Latvian

In the last few months, the story of Jallo from The Gambia, who currently lives in Riga, has got a lot of attention in the Latvian media. Latvia is a country which does not receive a high number of immigrants and where the overwhelming majority of the population are native Latvian or Russian-speakers, and so his story is particularly unusual.
Although Jallo has only been in the country for around a year, he has learnt Latvian well enough to conduct the following interview about his experiences of Latvia and his home country (see the video below from Satori). We’ve also provided an English translation for those who don’t speak Latvian.
Interview conducted by Lauris Olups. This interview has been edited for grammar and length.
[youtube https://www.youtube.com/watch?v=X6yRsVWgK5o&w=560&h=315]

J: My name is Jallo, and I am from The Gambia. I have lived in Latvia for a year now.
L: How old are you?
J: I’m seventeen years old
L: And what do you do here in Latvia?
J: I live here and study
L: Where do you study?
J: I study at Rīgas Vakara Middle School
L: Where’s that?
J: On Krišjāņa Barona iela.
L: In which class?
J: “Officially” I’m in the tenth class
L: And who do you live with?
J: We live on Bramberģes iela. I live with a Latvian family.
L: How did you find this Latvian family?
J: It’s hard to say, but I will try. Before, I lived in Vecpiebalga [a village in Vidzeme, northern Latvia] – in Madona district, not far from Vecpiebalga. I had [lived with] a family, but they could not be my guardians, but here [in Riga] one person wanted to help me – she said that she could help me, so that I could live in Latvia legally.


L: And how long ago did you start learning Latvian?
J: I think that it’s been eight months now.
L: What helped your studies the most?
J: I read books, and on the internet
L: And with the family you also speak Latvian?
J: Yes.
L: How many languages do you speak?
J: I speak six languages
L: And which are those?
J: Fula, Mandinka, Wolof, Serahuli, English – and now a bit of Latvian as well.
L: And when did you start going to school?
J: Before, I went to middle school in Vecpiebalga, and I was there for about three months. The most difficult subject is physics and I think only physics. My best subjects were in English, sport – I also could try mathematics.
L: What was your relationship with the other students at the school like?
J: It was hard, but I think they just needed more time.
L: In what way was it difficult?
J: Just their mentality. I could not change their mentality. I can only say what I am – but to change a person is very hard.
L: At the school you experienced encountered both positive and negative attitudes towards you?
J: I did, but I really don’t care.
L: Did you have friends at the school at that time or not?
J: I had friends, but not real friends. But I had friends outside school, but not at school.
L: At your school in Riga and at your school in Vecpiebalga, are there different attitudes towards you?
J: Yes, there are. At the start, Vecpiebalga was very hard, tough.
L: In what way was it tough?
J: Because they don’t have any experiences with people from Africa. I understood that they are not racist, but it was just their first experience. It was hard, yes.
L:  They just don’t know who you are, how to relate to you?
J: Yes
L: What are you interested in doing in the future? Where do you want to go when you finish school?
J: I would very gladly stay in Latvia – I already see my future here. But it’s hard to speak about the future. I think that everything will be fine.
L: You mentioned before that you’re interested in journalism?
J: Yes, I would like to become a journalist.
L: Why?
J: Because I like to write, and I speak a lot.
L: And can you write as well as speak in Latvian?
J: Yes, I can – I try to.

L: What do you like most about Latvia? What is the main reason that you want to stay?

J:  Because I have a family here, and I can go to school. I think that’s the most important thing.  In The Gambia I could not go to school, I had a family there but they couldn’t help me, and life there was very hard.
L: Tell me a little bit about the situation with your parents in The Gambia? What has happened to them? Are you in touch?
J: It’s hard. I was born in Sierra Leone, but when I was nine months old, I went with my mother to The Gambia. I am a Gambian citizen. It’s hard to speak about my family in The Gambia, because I lived with my stepfather.
L: Tell me a little about what is happening in The Gambia. What is the social and political situation?
J: Now everything is OK, but it was… We had a president – he was in power for 22 years. But he didn’t want to give up power, but…
L: He resigned?
J: Yes. And he lives now in Equitorial Guinea, but we now have a new president.
L: Better than the previous one?
J: It’s hard to say because it’s politics. Maybe he is – to my mind, politics is hard to talk about. We didn’t have, for example, a free press, and people couldn’t demonstrate.
L: Were people arrested because of their political views?
J: Yes, yes – many have been. I have seen it.
L: What have you seen?
J: In The Gambia, yes
L: But what? What did you see? You said that you saw people arrested for their political opinions – what kind of oppression?
J: There was one politician – he was not from the presidential campaign. And they demonstrated and the police came and arrested everyone.
L: By the president’s order?
J: Yes.

L: That’s about the political situation, but for you personally how was life in The Gambia? Could you go to school? Could you afford food and basic necessities?

J: School is not free. We have expensive and cheaper options, if you have the opportunity but I did not have the opportunity. I finished only the sixth class.
L:  You showed me earlier an article about you on the internet. You even laughed at some of the comments there – I thought that these comments seemed evil, not funny. And I saw that many people don’t want you to stay here. Why is this, do you think?
J: It’s hard to say, but they think that I am – I don’t know – I am dark-skinned, from Africa… I don’t know. But the comments were racist.
L: But how do you feel about those negative comments?
J: I just learn from it. I learn a lot – but I don’t care about it. People are not the same – people are different. I was in Cēsis, there was a competition there, and I participated. There was one person there – he thought that I didn’t understand Latvian – and they started to talk about me, and he said “don’t play with the refugee kid”. And he thought I didn’t understand, but I said to him “I understand what you are saying, but I don’t care – this doesn’t matter. We all learn from experience”. And he was amazed that I spoke Latvian, and he said “sorry, sorry, I didn’t know – it was nothing”.
I don’t know if this is racist, I think that it’s not racism – it’s just that people don’t have experience and they are frightened. I was on a coach and there were three girls, and they didn’t think that I understood Latvian. And they were saying “he is chocolate-coloured” – and I said “I understand what you’re saying”. And they were amazed, and said “oh, sorry, sorry – I did not realise that you understand Latvian”. And I said “I speak only a bit – but next time don’t speak about a person who you don’t know”.
L: But there was not anything malicious about those girls on the bus?
J: What?
L: Those girls on the bus – they were not thinking anything bad?
J: No, no, it was just…
I like to integrate with people and speak with people. I just want them to understand – it doesn’t matter if you are if you are from Africa, or from Latvia, we can all learn as we speak Latvian.
L: You said you took part in a competition in Cēsis. What kind of competition was it?
J: It was a running competition. I got three medals.
L: Medals for what?
J: A hundred metres, and also for one thousand [metres], and one kilogram…
L: Kilometre
J: Yes (laughs)
L: Something I haven’t asked is: what was your journey to Latvia like? How did you get here?
J: I came here legally – I got a Latvian visa. But before, I lived in Senegal, and after that in Egypt – and from Egypt I got a visa for Latvia and came here.
L: How did you get a Latvian visa?
J: There was a person… I don’t know how to say it in Latvian
L: Say it in English.
J: A human trafficker.
L: When we spoke before, you said you wanted to give something back to Latvia for what you have taken. What could you give?
J: Because I want to stay here, and I think that, for example, now I can give something back, because people can learn a lot from a person from Africa. Many people here think that people from Africa are bad people, but I think that a lot of people could learn from me. I can’t speak about the future, but I think that there is a lot that I will be able to give to Latvia.
L: But isn’t the winter hard for you?
J: My favourite season is winter. I like winter.
L: In The Gambia there is no winter?
J: No, we have just one long summer .
L: And why do you like winter?
J: Why? I don’t know – I really don’t know. I just like it – I don’t like summer, because all of my life I was in The Gambia in the summer.
L: You’d like it if it was always winter – twelve months of winter?
J: Twelve months of winter, yes. (laughs)

L: And what does religion mean to you?
J: I think it’s… just to do good. A lot of people think that Islam is a terrorist religion, but there are a billion Muslim people. And Islam is a terrorist religion?
L: And how long have you lived in Riga?
J: Three months now.
L: And where is your favourite place in Riga, where you like to go in your free time?
J: Coffee Inn – also Costa Coffee. And also the National Library. I have also been here before – I don’t know the name of this place.
L: Kaņepes Kultūras Centrs?
J: Yes.

Header image credit – Ģirts Raģelis
Translated by Will Mawhood. The original Latvian-language interview is available on the Satori website
© Deep Baltic 2017. All rights reserved.
Like what Deep Baltic does? Please consider making a monthly donation – help support our writers and in-depth coverage of Estonia, Latvia and Lithuania. Find out more at our Patreon page.

Discussing Identity and Minorities in an Estonian Border City, Pt. 2