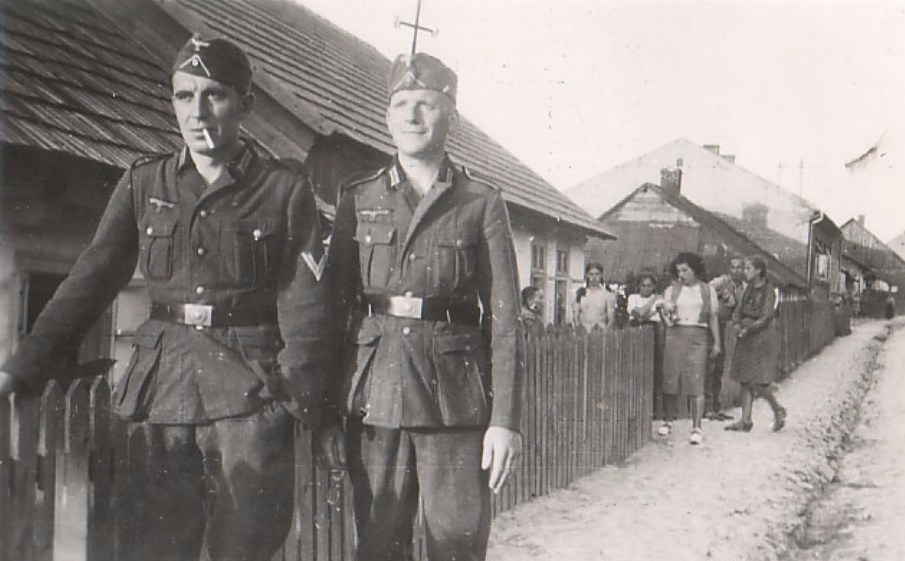 Fiction – The Song of the Stork

The Song of the Stork is author Stephan Collishaw‘s first novel for over ten years. Originally from Nottingham in England, he moved to Vilnius in the mid-’90s, a particularly tumultuous period for Lithuania, but a time he described as “simply the most wonderful year of my life”. His first two novels, The Last Girl and Amber, were set in Lithuania, dealing respectively with the legacy of World War II and the destruction of Vilnius’s Jewish population, and Lithuanians conscripted to fight in the Soviet war in Afghanistan.
Released earlier this year, The Song of the Stork tells the story of Yael, a fifteen-year-old Jewish girl separated from her family on the Polish-Lithuanian border during World War II, as the Nazi occupation takes it terrible toll, and the Red Army advances from the east. It has been called “a darkly compassionate fable of human endurance in absolute extremity”. As the book opens, Yael hides in a remote farmhouse owned by mute Aleksei – a relationship gradually develops, but in this extract this is unsettled by the arrival of Eva, a girl from Yael’s village, who has escaped the Nazis.

Eva took extraordinary care over her appearance, Yael thought. She watched as the elder girl conducted her ablutions the next morning. Yael had slept badly on the thin covers on the kitchen floor and woke with a headache and a sore throat. Eva, however, declared she had not slept so well in months. Yael brewed some tea, a cup of which she carried through to Aleksei. He nodded his thanks to her and for this she was grateful and rested her forehead against his briefly.
Before dressing, Eva washed carefully. If she was aware of Aleksei’s presence she showed no signs of being bothered by him.
“In the forest, there was little room for modesty,” she explained.
Yael sat at the table. Eva pulled up the hem of the shirt she had slept in and bathed her shapely thighs, as she threw back her head so her dark hair cascaded down her back and wiped her long throat with the damp cloth. Aleksei glanced up, then looked away startled and embarrassed. But Yael noticed his eyes flick back occasionally, as if caught on strings and yanked, without his willing it, in Eva’s direction.
“Eva,” Yael whispered, and nodded in Aleksei’s direction.
“Oh I’m sure he’s seen worse!” Eva laughed.
She dressed carefully in the clothes from the brown paper package; the silk blouse that fitted her neatly, accentuating her breasts, the skirt which displayed her small waist.
“Yael, sweety!” she said. “Help me with my hair.”
Over the next few days, despite her reluctance, Yael enjoyed having a girl’s company. Eva was happy to talk, and as they worked together, cleaning the house, they shared memories of Selo, of school and the friends they had. Eva told her about life in the woods; of how there were whole families surviving in the wild, three generations of a family, living in a narrow dugout, like frightened rabbits. She talked of the partisans she had come across.
But as the days passed Yael felt the house shrink. Life was circumscribed by Eva’s presence. Aleksei was agitated. Often he would storm out of the farmhouse and she would worry that he would disappear, but he would come back an hour or so later and linger in the doorway, watching them.
Yael longed for the silence of her life with Aleksei. The quiet hours when they would look out across the snow-bound fields, listening to the sound of one another breathing. When the feel of his hand, not more than an inch or two from hers would make her shiver. She longed for the books, the hours spent reading, his quiet concentration, the soft, sibilant sound of her tongue on the smooth verses.

And Eva would take little care. She would wander down to the well in the daytime and linger there, staring out into the woods. Aleksei would stand by the window, clearing his throat, scratching at the skin on his arms. He seemed to fear confronting her, and did not go out to remonstrate silently with her, as he had with Yael. It was Yael who scuttled out, nervous, glancing up towards the road, to see that nobody passing by would see them.

“Eva come in,” Yael begged, in a low voice, tugging at the sleeve of the coat she wore.
“Leave me.”
“It’s not safe, Eva.”
“Don’t order me around,” Eva turned on her viciously. Her eyes were alive and fierce. Yael was stung by the sharpness of her tongue.
That evening Eva pulled out the tin bath and heated up some water. Yael was out in the woods gathering firewood, to supplement the logs Aleksei had cut in the summer. The quietness of the woods soothed her. Aleksei worked by her side silently. Occasionally their bodies would draw close to each other, graze as they picked up the sticks, and Yael would feel a fizz of delight sparkle across her skin. In a little clearing, they stopped in the shadow of the trees and stood gazing out at the brilliant whiteness of the moonlight on the snow. Their breath hung in frosty clouds. A fox darted across the clearing, not noticing them.
When they returned, Eva was sitting naked in the tub. Aleksei stumbled in the door and would have turned and left, but Yael coming up so close behind him not understanding why he faltered, and keen to be out of the freezing night, pushed him forward. It was not until the door was closed behind her, that she glimpsed Eva’s ripe flesh and her smile like a split peach.
“Eva!”
“I didn’t expect you so quickly.” Eva laughed and stepped from the tub reluctantly, reaching up to take a towel from a hook on the wall, so that her full, lovely body was shown to the full.
Aleksei hurried through to the bedroom and pulled closed the curtain. “Eva, how could you?” Yael said sharply.
“What?” Eva wrapped the towel around her. “How was I to know you would walk in? Besides,” she added tartly, “you think he hasn’t seen a woman before?”
Yael turned from her angrily.
Later, Yael heard him fumbling about. Occasionally his bed would creak as he sat on it, but he seemed unable to rest and late into the night Yael heard him pacing the small room, as Eva slept quietly beside her.
“What are your plans?” Yael asked the next morning. She attempted to keep her voice light, but the anger from the previous evening had not dissipated.
“Plans?”
They were sitting at the kitchen table, Yael stitching some old trousers of Aleksei’s that had split, while Eva stared absently out through the window at the heavy layer of cloud that shrouded the sky, promising more snow. It would soon be March.
“I mean,” said Yael, searching for words, reaching for some language that would express the confused emotions that whirled around her mind. “I mean, how long are you thinking of staying here?”
Eva glanced sharply at Yael. Her lips tightened and Yael noticed the narrowing of her eyes.
“What do you mean by that?”
“You were talking of the partisans… I thought…”
Eva stood up and walked slowly around the table, stopping by the window, her back to Yael.
“I see,” she said, choosing Yiddish.
Often when they spoke, they used Polish. Yael did not like talking in front of Aleksei in a language he did not understand. Eva seemed oblivious to this courtesy and would often slip back into the colloquial language of their childhood.
“What do you mean, ‘you see’?” said Yael.
Eva turned from the window.

“It’s fine,” Eva said, her voice laced with contempt. “As soon as the weather improves, I will be out of your hair. I’m not going to spend my time cooped up in this hovel. I’m going to join a partisan group and fight.”

“It’s not that I don’t want you here,” Yael whispered, shamed.
Eva laughed unkindly. “I don’t care! You think I’m a threat to your little home?”
She pronounced the word with such contempt that Yael felt a rush of embarrassment. She stood up and faced the older girl. Eva cocked back her head and looked down her nose at Yael.
“Why are you so cruel?” Yael whispered. She had wanted to confront Eva, but the voice that emerged was timid.
“Me? I am the cruel one?”
“Why do you behave like this?”
“You are a disgrace!” Eva sneered. She stormed across the room and grabbed a coat. “I’m going. You happy? That’s what you wanted, no? Nu, va! There you go – I’d be better off with that family in their hole in the ground, at least there I would have some self-respect.”
“Eva.”
Eva pulled off her skirt and took the mended trousers from the table. She pulled these on and slipped her feet into boots.
“Don’t be silly, Eva.”
Grabbing a scarf and a hat, which she pulled forcibly down over her hair, Eva just grunted. She slammed open the door.
“Eva, come back!”
“Eva threw a crude comment over her shoulder.
Yael felt a sudden rush of fury at the young woman. She picked up a small log and threw it out after her. Eva turned and the wood hit her on the forehead. She yelped in pain. A thin trickle of blood ran down her face. Wildly, they stared at each other, their breath curdling in the frosty air. Yael was shocked at her own temper. The ferocity with which she felt when protecting Aleksei and the life they had together. Eva turned and walked away in the direction of the edge of the forest.
“Eva!”
“May you rot in hell!”
Her voice drifted back across the snow. Yael fell to her knees on the doorstep, a sob rising in her chest. She watched until the figure disappeared between the trees.
“Eva,” she cried. Her voice echoed back from the forest wall, bringing Aleksei running from the front field where he had been mending a fence.
“She’s gone,” Yael wailed, as he stooped down and grabbed her. “Go after her, Aleksei, go fetch her back.”
But Aleksei lifted her from the doorstep and carried her inside. She pushed against him, struggling to be free of his arms, but he held tight to her. He carried her through to the bedroom and laid her gently on the bed. When she struggled to get up, crying, the tears choking back her words, he shook his head and held his fingers against her lips.
“We can’t just let her go,” Yael cried.
But Aleksei held her there, until finally her sobbing had stopped and her body had ceased to shake. She lay quietly as he sat beside her and stroked her hair. They did not move for the rest of the afternoon and soon the sun had set. Aleksei brought her bread cut thick and clumsily, and a sliver of cheese. She ate it hungrily. He lay beside her then and took her in his arms and she buried her face in his chest.
“I am evil,” Yael whispered in the darkness.
But Aleksei had no words for her.

Header image – shtetl, Poland [Image: vilnaghetto.com]
The Song of the Stork is available now from Legend Press
Check Deep Baltic next week for an exclusive interview with Stephan Collishaw
Like what Deep Baltic does? Please consider making a monthly donation – help support our writers and in-depth coverage of Estonia, Latvia and Lithuania. Find out more at our Patreon page.

Gatis Krūmiņš: Debunking Myths of Soviet Investment in the Baltics