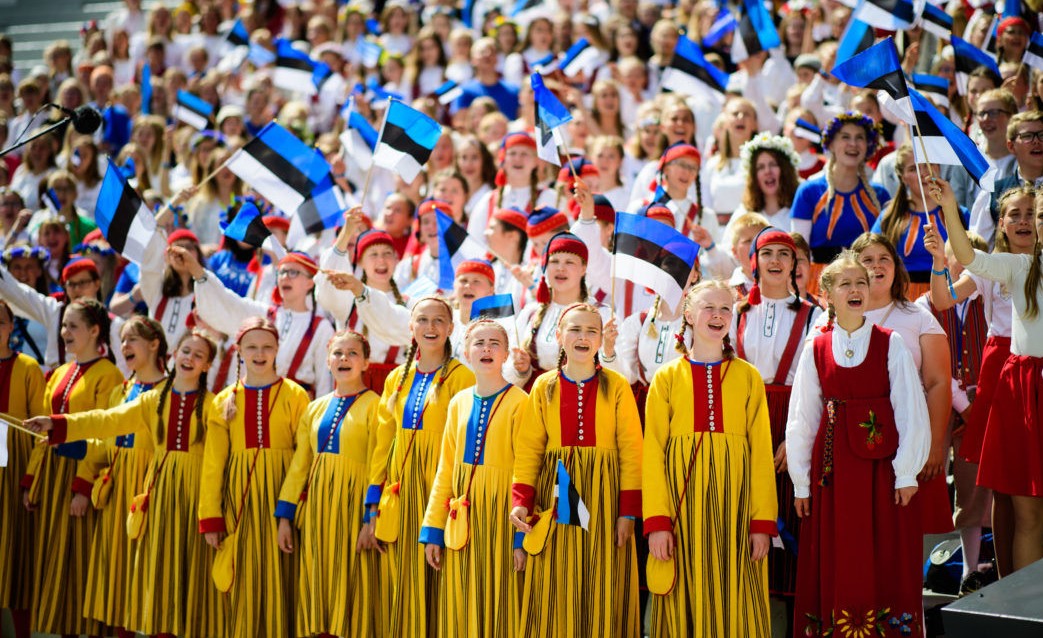 "Nobody, Nobody Is Alone": What Singing Means to Estonians

A man with a troll beard opens his mouth. He looks like he has stepped straight out of an Anton Hansen Tammsaare novel. While his gruff voice resounds over the crowd, thousands of throats are being cleared. These throats belong to boys dressed in sheep wool vests and flat caps, with healthy blushes on their cheeks, seemingly ready to take the hay off the land; to flaxen-haired girls with braids and elaborate constructions of wildflowers on their heads; to men with top hats and to women in white blouses and dresses with intricate patterns from the remotest corners of Estonia. All of them, shoulder to shoulder, repeat in unison: “Üksi pole, üksi pole keegi.”

A spectator doesn’t need to understand the lyrics to apprehend the feelings behind them – feelings of pride, solidarity and togetherness, restrained power, the belief that everything will be alright, in the end, as long as we hold our heads up and keep on singing. Those impressions are reinforced by the words: “Nobody, nobody is alone.” During the Estonian Song and Dance Festival (Laulu- ja tantsupidu), celebrated once every five years, that sentiment feels like an understatement.

Deep within every Estonian lives the desire to sing out loud. Preferably in a group. Put three Estonians in a room and chances are that they will found a choir. Or a successful start-up, of course. Estonia boasts one of the biggest collections of folk songs in Europe. President Kersti Kaljulaid, one of the 35,000 singers participating in the Song Festival, stresses the importance of singing for the country during her speech: “Singing brings Estonians joy. Singing gives Estonians courage. Singing makes Estonians free.”

But the question remains: where did that Estonian urge to belt out songs originate?

It certainly helps that the Estonian language, with its abundance of vowels, lends itself well to singing. It’s also worth noting that summer in northern places like Estonia, more than anywhere else, is the time to recharge batteries, a life-or-death matter of getting ready for the wearing winter. Estonians do so by soaking up as much sun as possible during long Baltic days, making bonfires and grilling meat, and likewise by singing, exemplified by events like the Song and Dance Festival.

A history of oppression provides the rest of the explanation. Only in 1819 did Russian tsar Alexander I abolish serfdom in Estonia. “Before that, Baltic Germans owned Estonians like herds of animals”, says Marju Lauristin, professor of social communication at the University of Tartu and former MEP for the Social Democrats. The Germans dictated cultural life, and no Estonian could take part. From 1819 onwards, Estonians were no longer serfs, but they were far from being first-class citizens. Baltic Germans and Russian tsars still dictated cultural life.

Choir singing, closely connected to the church, was one of the only ways for Estonian peasants to express themselves. “The Lutheran church has strongly influenced our singing traditions”, says Lauristin. “Let’s not forget that Estonians became Lutherans already during Martin Luther’s lifetime. Choir singing was part of the primary education of peasant children way before there was talk of a song celebration.”

To commemorate the 50th anniversary of the abolishment of serfdom, Johann Voldemar Jannsen organised the first Song Festival in 1869 in Tartu. Jannsen was the godfather of Estonian journalism, and the father of poet Lydia Koidula. The first Song Festival coincided with the Estonian national awakening. “Until then, Estonia didn’t feel like a cultural nation”, says conductor Kaie Tanner, who works for the Estonian Choral Association. Previously, the Estonian language had been a language of peasants who were not equal to the German aristocracy and pastors; it was not a language for making art. “But all of a sudden, we realised that we as Estonians could form a nation. We could be among Europeans and do something meaningful, something more than just slaving away on the fields.”

“Estonians had only just started to comprehend that there was a name for them”, says Peeter Perens, conductor and artistic director of the 2019 edition of the Song Festival. “The 1869 song celebration was the first manifestation of our identity and has – ultimately – lead to our statehood. By singing, we kept ourselves alive as a nation. Without singing, there would be no Estonia.” The year 1869 marked the first time singing was present during a key moment in the history of Estonia. It wouldn’t be the last.

On a side note: Tartu didn’t only serve as the cradle for the Estonian song celebration traditions. In those days, northern Latvia and southern Estonia were united under the Livonian Governorate of the Russian Empire. Tartu was the intellectual hub and the birthplace of the national awakenings of both peoples. Latvians studied in Tartu, while Estonian composers and conductors learned the trade in present-day Latvia, first in Valmiera and later in Walk (now Valga/Valka).

The Latvian and Estonian song celebrations thus share common cultural roots, but Estonia’s is “built on two spiritual pillars”, explains Perens. “The first pillar is the old Finno-Ugric culture, which has been captured in films by our former president Lennart Meri; in music by composer Veljo Tormis; and in visual arts by Kaljo Põllu. This culture has been preserved for thousands of years. Runic songs belong to it as well. The second pillar is the European culture in which we live today in Estonia. The song celebration itself is a phenomenon of German and Swiss singing culture.”

Lauristin emphases the role of singing in creating national memory. “Through all these years since the first song festival, Estonians have come together in schools and singing societies”, she says, “They’ve walked 10 kilometres through snow and rain to rehearse these beautiful songs, some of which have been written a century ago. These songs are about things close to the heart of Estonians, they’re songs that express their deepest feelings of love and joy, sorrow and despair.”

Now that we’re on the topic of sorrow and despair, let’s fast-forward to the end of World War II. The Soviet regime makes an unwelcome entrance into the Baltic countries. The party leaders allow the song celebrations to continue, as long as they include sufficient numbers of songs singing the praises of Lenin, Stalin and the Red Army. The Estonians can only comply. But at the end of every Song Festival, they dare to mutter their own songs. Most notably “Mu isamaa on minu arm” (“My Fatherland Is My Love”), written by Koidula and set to a melody by composer and conductor Gustav Ernesaks:

My fatherland is my love,

I shall never leave him,

Even if I must die a hundred deaths

Though foreign envy slander you,

You still live in my heart,

These lyrics somehow made it past the Soviet censors and each time led to a rare moment of unity for Estonians. “The song celebration was one of those few places where we, Estonians, could feel like one – not part of the Soviet Union, but part of our own nation”, says Tanner. “It’s important to remember that fear was the prevailing emotion during the Soviet occupation. People felt fear everywhere. Still, my parents taught me the so-called prohibited songs – and singing them was a way to keep our identity alive. Just like the old [Estonian] tricolour flags that were hidden in attics or buried in the yard helped us to keep the memory of a free Estonia. It was our secret rebellion – the feeling that we didn’t obey the occupation, that we had something that was forbidden and that we were not going to give it away. It was ours, our language, our flag, our book, our culture, our song.”

Tanner hastens to add that her parents taught her never to sing these prohibited songs in public. “People disappeared for less”, she whispers, “They were arrested and sent to Siberia.” Which makes the events of August 1988 all the more remarkable. Night after night, Estonians gathered in the song festival grounds to chant the forbidden songs. “Soviet policemen were all over the place”, says Tanner, who attended as a fifteen-year old. “But what could they do? They couldn’t possibly arrest 75,000 people. That realisation, together with a strong feeling of freedom, gave us so much power.” The Singing Revolution eventually led to freedom for Estonia, as well as Latvia and Lithuania. Another key moment in Estonia’s history was shaped by singing.

But what does that mean to the younger generations of Estonians who perform during the song festival, those who’ve never known anything but a free Estonia and whose only conception of the Soviet Union comes from history books and stories told by older relatives? We asked Rasmus Puur, a song festival conductor born in 1991, the year of the re-establishment of Estonia’s independence. “I think music is the one and only art that has an immediate impact on us”, he says, “Books or theatrical plays need time to sink in, but music works straight away. If you’re making the music yourself, you feel how the sounds move you physically. When you’re standing shoulder by shoulder in a choir, you feel a harmony between you and I. The search for that harmony between people is the basis of our lives. We need it to forget about the struggles in our everyday life.” The struggles might have changed, but the way of dealing with them hasn’t.

Perens calls singing a “mirror of the Estonian soul”. As a conductor involved in selecting the pieces for the programme, he became aware of the magnitude of his responsibility when he heard his son sing in the shower the songs he had carefully selected. “I realised that young men all over Estonia sang these same songs in the shower.” It is no exaggeration. In association with the University of Tartu, Marju Lauristin surveyed Estonians about the meaning of the Song Festival. She concluded that half of them had performed during the celebration, either as a dancer or a singer. “Half of the population has practical experience of being together in this way”, she says, “Listening to each other’s voices, trying to be in harmony with each other. Nowadays, the protest function is gone. It’s all about feeling together as a community. More joy, less bitterness. Today’s “Mu isamaa on minu arm” is different from the version of the Soviet times. Now it’s a love song.”

Maybe it goes even deeper than that. Statistics imply that Estonia is one of the least religious countries in Europe, but some Estonians think that singing has taken the role of religion. The Song Festival is like a big service, the grounds like the church. Riho-Esko Maimets, a Canadian-born Estonian who composed a song for this year’s festival, believes there’s truth to that idea. “Just because you go to church doesn’t mean you’re religious”, he says, “Estonians are deeply religious – they go to the forest to pray, have a relationship with the sea, and sing and write poetry about nature. This event is not a choir festival, it’s a religious ritual, like going to the altar to receive communion. Listening to this music is the closest you can get to being Estonian. The way the sound vibrates is the deepest essence of Estonia.”

Tom Peeters is a Belgian freelance journalist who divides his time between Estonia, Belgium and the wider world. He writes about the Baltics for various Flemish media, as well as on his blog in English and Dutch.

"The Forest Is in Our DNA": Lithuania's Ancient Woods