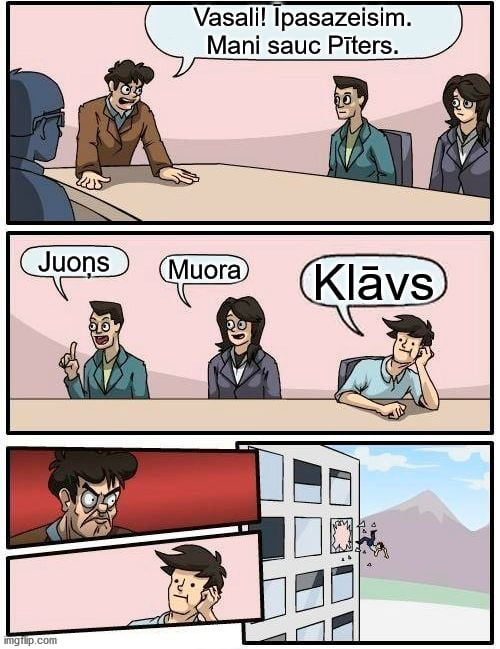 Meming in a Minority Language: Young Latgalians and the Internet

Every internet user has access to all different kinds of information in huge quantities. And on the internet, it’s also possible to find all different kinds of articles, songs and videos in the Latgalian language, and to read various books in Latgalian. A large proportion of this information is aimed at young people, as it is most often this group that most “makes friends” with the internet and modern technology. The website lakuga.lv carried out a small survey to find out what kind of information Latgalian-speaking young people consume and what else they would like to hear and see on the internet in Latgalian.

Although in the last few years, the Latgalian cultural space has become broader and Latgalian can be heard more and more often on the radio, on television and on the internet, as well as on the street, a number of respondents answered that they want to hear Latgalian on the street even more, especially among young people. One of the young people answered that they would like to see a standardised form of Latgalian. A number of older people preferred the old principle of writing the diphthong “uo” as “ō”. For their part, young people would much prefer to write this diphthong as “uo”. It should be pointed out that in the orthographic rules for Latgalian that were approved on 28th September 2007, it is permissible to write the diphthong “uo” as “ō”, and for that reason this remains a question of tolerance between those who don’t really like the “ō” variant, and those who aren’t fond of the “uo” version.

A number of respondents expressed a desire for programmes for young people. Although there already are shows and content for a youth target audience, this desire for additional content makes us think that this content is too limited. There’s a need for information in Latgalian about complicated topics related to social responsibility; in the respondents’ answers there can also be observed an interest in political content in Latgalian. But in order to attract a youth audience, solutions have to be sought for how to offer this kind of information in a simplified, interesting way. One option, which was also suggested by one of the respondents, would be a place for virtual discussions on social networks. However, in making these ideas a reality, there exists a risk that from a place where substantiated opinions are expressed about specific problems, observing a spirit of tolerance and mutual courtesy, it could become a platform where users insult one another, abusing those with views and opinions that don’t coincide with their own, as can quite often be observed on the comment sections of news services, and on Facebook groups of like-minded Latgalians.

On the subject of young people and information relevant for them, one respondent answered that they wanted to see more Latgalian “memes”, or funny pictures and jokes. Latgalian jokes can be seen on Facebook every now and then, and many of these can be found on the Facebook page “Latgaliešu memes” (Latgalian Memes). Through humour, these inform readers about Latgale and the traditions of the region – for example, the “kopusvātki” (cemetery festival). In the image below can be seen some stills from the video to the track “Hotline Bling” by the rapper Drake. In the original video, Drake is dancing, but with the help of specifically chosen individual shots, it’s shown that Drake does not approve of one version, while really liking the other one.

On the “Latgaliešu memes” page, there’s no lack of posts relating to and teasing “čiuli” (as Latgalians call Latvians who live outside Latgale and don’t speak Latgalian). Over a number of years the phrase “čiuli pipši” [used to refer to Latvians outside Latgale] has attained great popularity among the Latgalian-speaking community, and this can also be seen on the “Latgaliešu memes” page. The majority of the posts on the page are in Latvian, but they are about Latgale.

On Facebook can also be found the page “Latgaļu humors i dzeivis gudreibys” (Latgalian Humour and Words of Wisdom), where posts are for the most part in Latgalian. This page also through humour takes a look not only at everyday life, traditions and peculiarities in Latgale, but also at “čiuli” – even having a laugh about them. In the picture below can be seen a rather widely known meme, in which a number of colleagues are attending a meeting and introducing themselves. While the other colleagues have “usual” first names commonly found in Latgale, the last to introduce himself is called Klāvs. To Latvians who live outside Latgale, this would seem a perfectly normal man’s name, but in Latgalian the word “klāvs” means a shed in which animals are kept.

One of the survey respondents replied that high-quality content for children and seniors is also needed. Last year Latgolys Regionaluo Televizeja (Latgale Regional Television) presented a unique five-episode series for families and children, Žik!, in which presenters Ausma Sprukte and Adriana Goroščaka visited people who preserve Latgalian traditions, met families whose children speak Latgalian, and gave viewers the chance to learn some words in Latgalian. A number of books for children have also been published: for example, Ineta Atpile-Jugane’s poetry collection Lobuo i nalobuo (“Good and Bad”). The Latgalian-language space also features the literary almanac Olūts (“Source”), whose target audience is older people. (This is an area that could be grown and expanded, by making the accessible information easier to comprehend or by creating content that would be specifically intended for older people.)

One of the young people replied that within the Latgalian information space, they would like to see programmes about Latgale and videos about Latgale, about where to go and what to see. It should be mentioned that there are already a number of programmes dedicated to this theme: for example, Latvijas Radio’s Latgale studio every week produces the programme Breivdīnuos iz Latgolu (“To Latgale at the Weekend”) which gives an overview of various events which can be visited and enjoyed in Latgale. Likewise, at the end of almost every episode of the youth programme 5 Breinumi (“Five Wonders”), listeners are recommended events and festivities for the coming week.

Podcasts, online conversations about particular themes, such as travel, technology, etc., have achieved especial popularity among internet users in recent years. Some young people surveyed wrote that they want to hear some podcasts in Latgalian too. At the moment there are already some podcasts on the internet in Latgalian – for example, Ej šī! Paruonisim? (“Come here! Shall we chat?”) created by Aija Mežale and Laila Rasima, in which different topics are discussed. The youth programme 5 Breinumi can also be listened to not only on Latvijas Radio’s fifth channel, but also in podcast format on many other platforms.

Many of the young people wrote that they feel there is a lack of translated books in Latgalian, as well as of horror and science fiction novels in Latgalian. Young people also want to read books in digital format.

Some young people expressed a desire for new arrangements of older music, as well as for more modern music in Latgalian, because they “are fed up of folk songs, which play all the time on a loop”. On the subject of music, young people also want more concerts, including more concerts in smaller towns in Latgale. Many groups well-known in Latgale and all over Latvia also make music with Latgalian lyrics – Bez PVN, Dabasu Durovys, Latgalīšu Reps, the rapper Ūga, Rikši, and many others. In Latgale, many events also take place in Latgalian, among them the annual Latgalian culture awards Boņuks; at the festivals Muzikys Skrytuļs and Upeitis Uobeļduorzs, the Latgalian language and songs in Latgalian can be heard. But young people want to hear the Latgalian language and Latgalian culture at events in Riga too.

Many respondents’ recommendations were connected with television. Young people want to see sports round-ups in Latgalian, and more shows aimed specifically at them, stories about real-life experiences of Latgalian young people, adverts in Latgalian, all different kinds of TV programmes, and journalism in Latgalian with an emphasis on regional news. Young people also want to have some kind of newspaper to read when they travel home from Riga, as well as more apps with the option of selecting Latgalian – for example, like on the app of the bank Citadele, as well as its cash machines.

There is a demand for all kinds of content in Latgalian – now resources are needed in order to realise it: financing, ideas and energetic people to start work on it.

Sintija Augustova is a student at the University of Latvia, currently working on her bachelor’s in Communication. She has an interest in Latgalian culture and language, creating content in Latgalian for the website lakuga.lv and radio broadcast 5Breinumi.

This article originally appeared on the website lakuga.lv. Translated from Latgalian by Will Mawhood.

The Interwar Plan for a “Backup Lithuania”: An Interview with Karolis Kaupinis

Latgalian: How the Language of Eastern Latvia is Being Revitalised