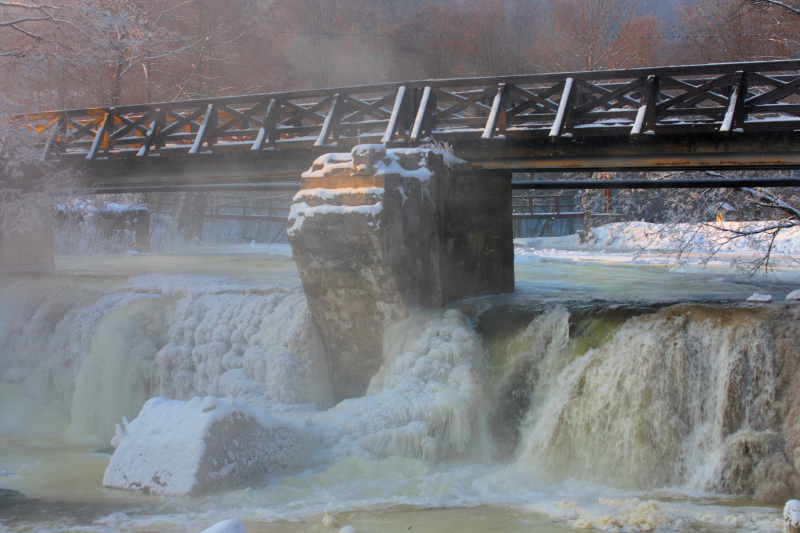 Since last summer, the 50mm Vilnius blog has carried a daily photo of Lithuania’s beautiful capital, showing one of its many different sides – whether from its UNESCO-listed Old Town, its bleak Soviet-constructed “microdistricts” or the many varied areas in between. Posts have ranged from familiar icons of the city such as Gediminas Tower and its baroque Catholic cathedrals to more surprising subjects which would perhaps not usually be associated with Lithuania – from ski lifts to Tartar mosques. The website counted down to Christmas with an “advent calendar” of Vilnius’s 21 elderships. Now the anonymous expat photographer responsible for the project has shared his favourite photos so far with Deep Baltic, as well as talking about his motivations and ambitions for the project.

Naïve is perhaps how to best describe a person exploring a new home town. Naïve in that the exploration is still untainted by familiarity and context. You are still allowed to marvel at buildings that locals scoff at because they went over budget. You are still allowed to think that it’s quaint that streets are still being swept, salted and sanded by hand, when no doubt the people doing that job would much prefer to be in a shiny machine on wheels that did the job for them.

It is this naïveté that the 50mm Vilnius blog is trying to capture. It is a fleeting condition that I am experiencing at the moment, having moved to Vilnius for a 12-month stint in summer 2015.

That was the thought behind the 50mm Vilnius blog. The project is to post a photo each day, during 365 days, using a 50mm prime lens attached to a Canon SLR. The photos don’t have a theme as such. Things that I, as a new arrival to Vilnius, find interesting, or can use to tell a story about my experience in the city make it onto the blog.

I’m not going to disclose who “I” am. Quite frankly, it doesn’t really matter – the blog isn’t about me, and I’m not writing it for fame or fortune. There are a few acts that are relevant, which I will disclose. But any more, and I am worried that people will front-load the content with preconceived ideas about why a photo was taken or why it was captioned in a certain way.

I moved to Vilnius in August 2015 from another European capital, with my spouse and two small kids. We moved because of my spouse’s work, but I’m carrying on my old job as before – the benefit of having a 21st-century job that you can do pretty much anywhere with a phone and a laptop.

I don’t need to fill my days with something to do. Rather, the blog is an out-of-hours effort to capture the cocktail of impressions and emotions that you have when arriving and settling in somewhere. In short, the blog is a mirror of what I do as I go about life – I don’t live life in a particular way just so that I can keep the blog fed.

I’m not going to spend hours stitching together a high-quality HDR image of the sun setting over the Vilnius skyline. Nor am I going to hang about a particular spot for weeks to capture the perfect photo.

I do prioritise photographs that tell a story (or that can be used as a visual aid for a story), rather than the visual quality of the image on its own. The blog is also a reflection of the everyday things I see, given the circumstances. With a family around, an afternoon is more likely to be spent taking the bikes out around the block than exploring the culinary delights of the old town.

The blog is motivated by what I felt was a lacuna when preparing for the move to Vilnius. Websites for tourists are plentiful, but tell little about moving here. There have been a handful of diary blogs by Vilnius expats over the years that were interesting to read. But I still lacked something that would give a sense of what “life” would be like in Vilnius. What things do people do – what is there to see (beyond the tourist trail). What things do you learn after spending a little time in Vilnius about the city and its people? The blog doesn’t claim to cover the entire gap, but I hope it helps to fill it, and I would hope that someone in a similar situation as me half a year ago, would find it interesting.

It is a project that, with the benefit of hindsight, I wish I would have done in the first year of moving to the other places I have called home.

But what about this naïveté that the blog is trying to capture? The feeling is one I have had many times – a life spent no more than seven years in any given city across two continents. It is the feeling that you lose after a while – months, years. When you no longer get a buzz out of the pedestrian autobahn that is London’s Oxford Street. When you stop pausing and looking up at the Art Nouveau architectural masterpieces of Brussels on your way to work. When you take the scenic route along the beach in Miami only because the highway is bumper-to-bumper.

For this kind of project, Vilnius is ideal. It is small enough that you can get your bearings relatively quickly. It also has a creative energy disproportionate to the city’s small size, which ensures that there’s always something interesting to photograph and write about.

When an event is on in the city, everyone is there, and the small size ensures that it’s fairly easy to keep tabs of what the main events are.

The seasons pull out all the stops, too – offering searing summer heat begging to be doused with a refreshing dip in a lake; autumn walks in the forests in a golden haze of crisp sunlight and yellowing leaves; compact darkness at midwinter; blistering cold.

There is also the darker side to Vilnius and Lithuania – a memory etched into the soul of the city, one lingering from the Soviet times that sometimes manifests itself in melancholy, and sometimes in defiance.

The blog will also, I hope, offer a snapshot of a city that is transforming itself at breakneck speed – perhaps motivated by a desire to leave the pain of the past behind. I will not be surprised if I come back in 10 years, and find it difficult to trace where some of these photos were taken.


50mm Vilnius is authored by a 30-something journalist, parent, spouse, and occasional crochet enthusiast, who has called Brussels, London and Stockholm home in recent years, currently on a 12-month adventure in Vilnius.
Header image: Waterfall at the Belmontas mill in Pavilniai Regional Park to the east of Vilnius, frozen by temperatures below -20C
All photos copyright 50mm Vilnius
© Deep Baltic 2016. All rights reserved.