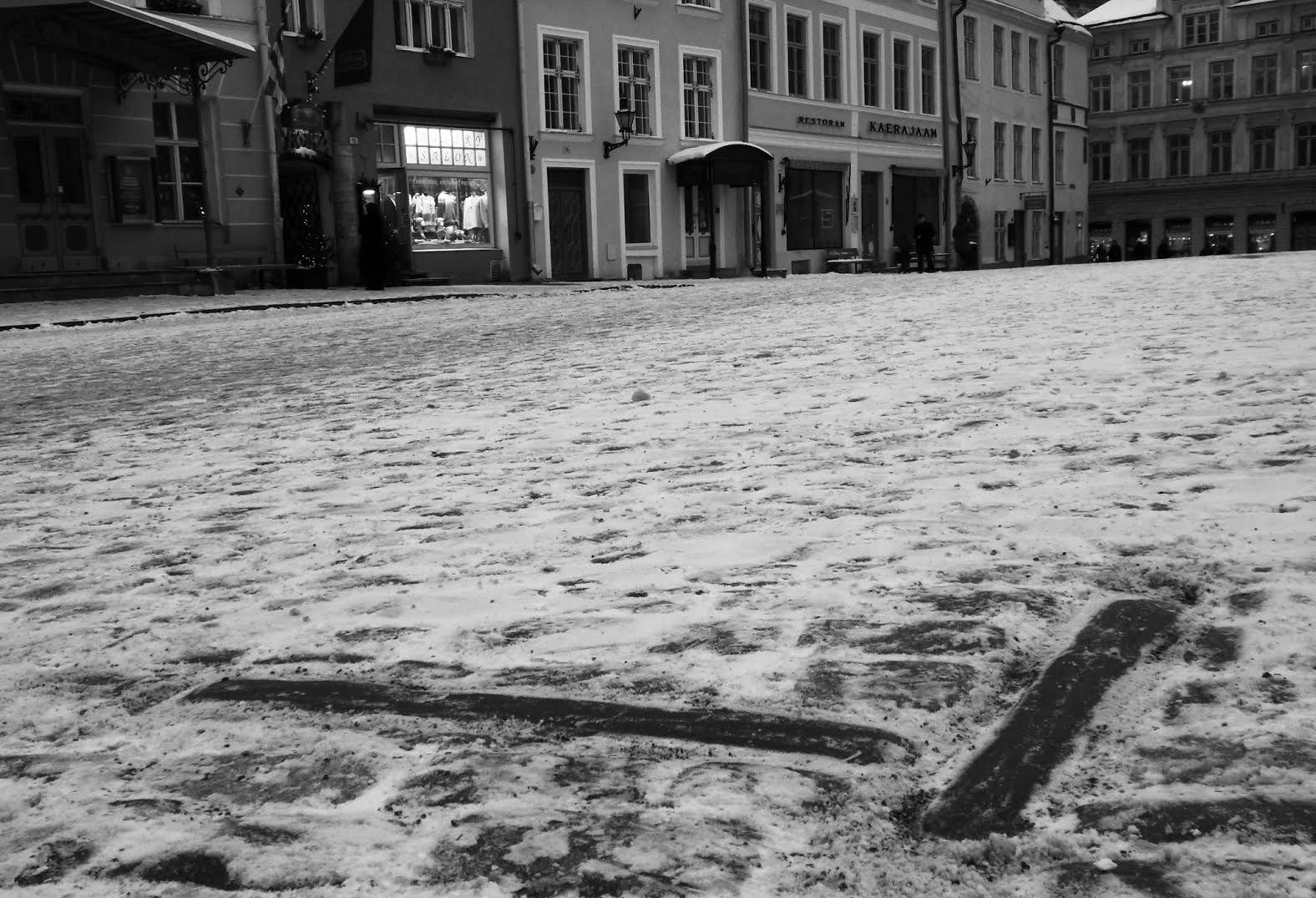 by Tom Tonks, TALLINN
The building at Rataskaevu 16 is a relatively unremarkable structure. Identical in size and specifications to many of its neighbours, this orderly amalgamation of bricks and mortar slips seamlessly into the silent backdrop of everyday life. Day after day, preoccupied crowds meander past, the minutiae of existence rendering them oblivious to the dark story that lies behind the undistinguished facade of this building.

A foray into the captivating world of Estonian folklore reveals that not only is the Old Town awash with tales of ghosts, mysterious old men and miracles, but that Rataskaevu 16 lies at the heart of this story-telling tradition.

Centuries ago on a cold winter’s night, the bankrupt hotel owner of this building, grown increasingly destitute with the sheer lack of custom, decided to take his own life.
Just before the fatal moment, as if by fate, a loud knock on the door pierced the silence. Jolted into life, the owner leapt to the door to greet his saviour. A cloaked man stood before the poor man and asked him if it was possible to rent one of the large rooms on the top floor until dawn for a large party. The stranger would pay the landlord handsomely but only on the condition that he received complete privacy. The hotel owner obliged the stranger, counting his blessings.
Later that evening, elaborate coaches – each more beautiful than the last – pulled up to deposit the revellers into the hotel. Thunderous celebrations ensued as the fabulous music, raucous singing and frantic dancing shook the building to its very foundations. The irrevocable pull of curiosity tugged at the landlord as he battled between the wishes of his guests and his desire to take the smallest peek into the room to view the splendour of the proceedings. The volume and intensity of the party overwhelmed his better judgement and he climbed the stairs, betrayed his promise and peeked through the keyhole.
Recoiling in terror, the landlord was engulfed by a stunned silence, for what he had witnessed, according to the legend, was the Devil’s wedding.
Word of mouth has altered the account of what happened next. Some versions of this story suggest that the owner entered the room the morning after to see a goat-skin bag full of gold and that upon touching it, the bag turned to horse dung and the man fell to the floor, dead. Others tell of countless hoof and claw prints all over the floor.
Word that the Devil had appeared in Tallinn spread rapidly through the city, with wild re-tellings of that fateful night leaping from door to door like an uncontrollable virus. In their blind panic the Town Hall ordered the room to be walled up and the window filled-in so no soul could ever enter again.
Today, the facade of number sixteen, Rataskaevu Street – that unremarkable structure – bears a painted image of a window, a desperate attempt to cover the room that supposedly housed the Devil’s Wedding.

Like many old towns across Europe, Tallinn possesses a ‘hidden history’ running parallel to the over-touristed medieval splendour and café culture; a sub-strata of stories concealed from view but accessible to those who know where to look. This ‘history’ is not based on archival evidence and archaeological artefacts, but on a more romantic premise of storytelling and word of mouth. It is no exaggeration to suggest that nearly every street in the Old Town is host to at least one of these fanciful tales. Tallinn is a city engulfed by folklore and for those keen enough to explore and delve into this ‘hidden history’, the rewards are numerous.
The story of the Devil’s Wedding is a quintessential example of how these mythological tales are played out in the modern day. In this instance, a painted window is the only physical homage to the story. There are no plaques or signposts – indeed, no indication whatsoever that this building is one of the most important in Tallinn folklore. How many people pass these minor landmarks every day, totally unaware of their significance? How many times do these fascinating stories go untold? The elusive nature of the Old Town legends is certainly one of their common features.
For an illustration that the Devil’s Window is not the only quirky architectural feature in the Old Town, one has to walk less than a hundred metres, around the corner to Raekoja Plats. The historical communal centre of Tallinn bears a hallmark of mythology: a pair of elongated bricks disturb the geometric pattern of the cobblestones to form a very clear L- shape. This is not poor brick-laying, but a hidden clue marking the supposed site of the only execution ever to be carried out within the walls of the Old Town. A furious priest in the Riga Tavern, disgusted by his cup of warm beer, had thrown the ceramic tankard at a barmaid, killing her. Angry onlookers demanded instant justice from the Town Hall and received their wish as the priest was dragged out and executed on the spot. The only remnant of this horrific incident is the “L” that is only visible in the winter time once the summer terraces of  Raekoja Plats have been removed.

The opposite corner of the square connects with Harju Street, an ancient road that was destroyed by intense bombing campaigns during World War II and has been rebuilt and reshaped many times throughout the centuries. Despite this turmoil, one tiny feature of Harju street has survived: a thin strip of cobblestones bordered by thick walls known as Trepi, or perhaps by its more elusive title, “The Eye of the Needle”.

It was said that if a condemned criminal could repent his sins from the bottom of his heart before he was lead along Harju Street (known at the time as ‘the last road’) then a divine power would make it possible for him to escape. On several occasions men were known to have vanished from the procession – disappearing through “the Eye of the Needle” and behind the Church of St. Nicholas, to freedom. Trepi Street remains as a homage to this legend, symbolising ideas of repentance and reformation. Every criminal who escaped went on to live a very pious life.

Not all myths and legends reside at street level. The rooftops of Tallinn also offer glimpses into the fascinating world of medieval storytelling. An upward glance on the corner of Pikk and Hobusepea Street reveals a statue of an old man dressed respectably in a fashionable grey jacket, buttoned-up smart blue shirt and elaborate ‘judge’s wig’ haircut. His nonchalant pose and striking opera glasses exude an aura of high-class presentability but this unscrupulous fellow is no gentleman. Infamous for his constant spying, he would regularly be spotted leering through his window as the beautiful woman in the opposite house was getting dressed. Her husband had no desire to incite violence against the elderly gentleman but instead hired the most skilful sculptor he could afford to craft a statue of the old man, complete with ‘opera glasses’, which he placed on top of his house. The next time the perverted man donned his infamous spectacles and stared across the street he was confronted by his own reflection, set in stone, leering back at him.

When the Old Town was named as a UNESCO World Heritage Site, the report included a statement that despite the beautifully preserved medieval grandeur, many buildings of historical importance are being refurbished for touristic purposes. As more and more buildings become repurposed under the pressure of this inevitable progression much of the aura that gives the Old Town such historical authenticity is disappearing. The fact that these stories still have a physical presence in the Old Town today is perhaps the clearest testament to their relevance and importance to the cultural identity of the city. It would be easy to tear down the old man statue, install a window on Rataskaevu or pave over the “L” on Raekoja Plats but by maintaining these vital links to the storytelling traditions of the past the city planners have acknowledged the innate value they possess. Indeed, in the internet age these stories are more precious than ever.

A final tale that is often overlooked by visitors and Tallinn citizens alike concerns a statue of a tiny deer who played a huge part the founding of the city.
Shortly after the Danish King Valdemar and his forces had conquered Northern Estonia and converted the population to Christianity the king was taking a stroll in his new grounds. In the upper quarters of the town he spied a tiny deer. Rather than hunt the animal, the new king ordered his courtiers to find and capture the animal so the king could keep him as a pet.
The deer proved to be very elusive, leaping and bounding past the carefully laid traps of the courtiers. The chase continued for several hours, but eventually, the tiny animal was cornered on the edge of a limestone cliff where, rather than giving in to the men, he jumped off to his death.
The king was devastated by this turn of events and decided to name that particular spot in honour of the deer. He decided to call this point at the top of the hill “Reval”, which translates literally as ‘deer-fall’.
Today, this cliff is a popular viewpoint, at the base of which sits the tiny statue: a tribute to the story of the deer. Considering the plethora of dark stories littered across Estonian folklore and history it would seem odd that this particular animal would hold such importance. That is, until historians pored through the earliest city records to discover that Reval, aside from its emotional resonances to the King, predates ‘Tallinn’ as the original title of the city. Therefore, in essence, this tiny deer gave the city its name.

Although such stories may seem fanciful and almost certainly exaggerated, the sense of wonder and romanticism that they provide cannot be understated. These story-telling traditions add a richness and intrigue that transcend the aesthetic beauty of the Old Town. Passed down through word of mouth, told and re-told by those who are passionate about them, the myths and legends of Tallinn have the capacity to entertain, educate and fuel a child-like suspension of disbelief that even the most hardened individual cannot ignore. They are incredibly powerful and to negate them on the basis of their historicity is to totally overlook the mythological foundations upon which the city was built. Storytelling is perhaps one of the oldest traits of human society so as long as there are still people willing to share and to hear these tales, they will continue to live on through the generations.

Tom Tonks runs Hidden Tallinn, a blog dedicated to unearthing the secrets of Estonia and her fascinating capital city.
All images – credit Tom Tonks
© Deep Baltic 2016. All rights reserved.
Like what Deep Baltic does? Please consider making a monthly donation – help support our writers and in-depth coverage of Estonia, Latvia and Lithuania. Find out more at our Patreon page.

A Sleeping District of Poets and Painters: Redefining Kaunas's Šilainiai