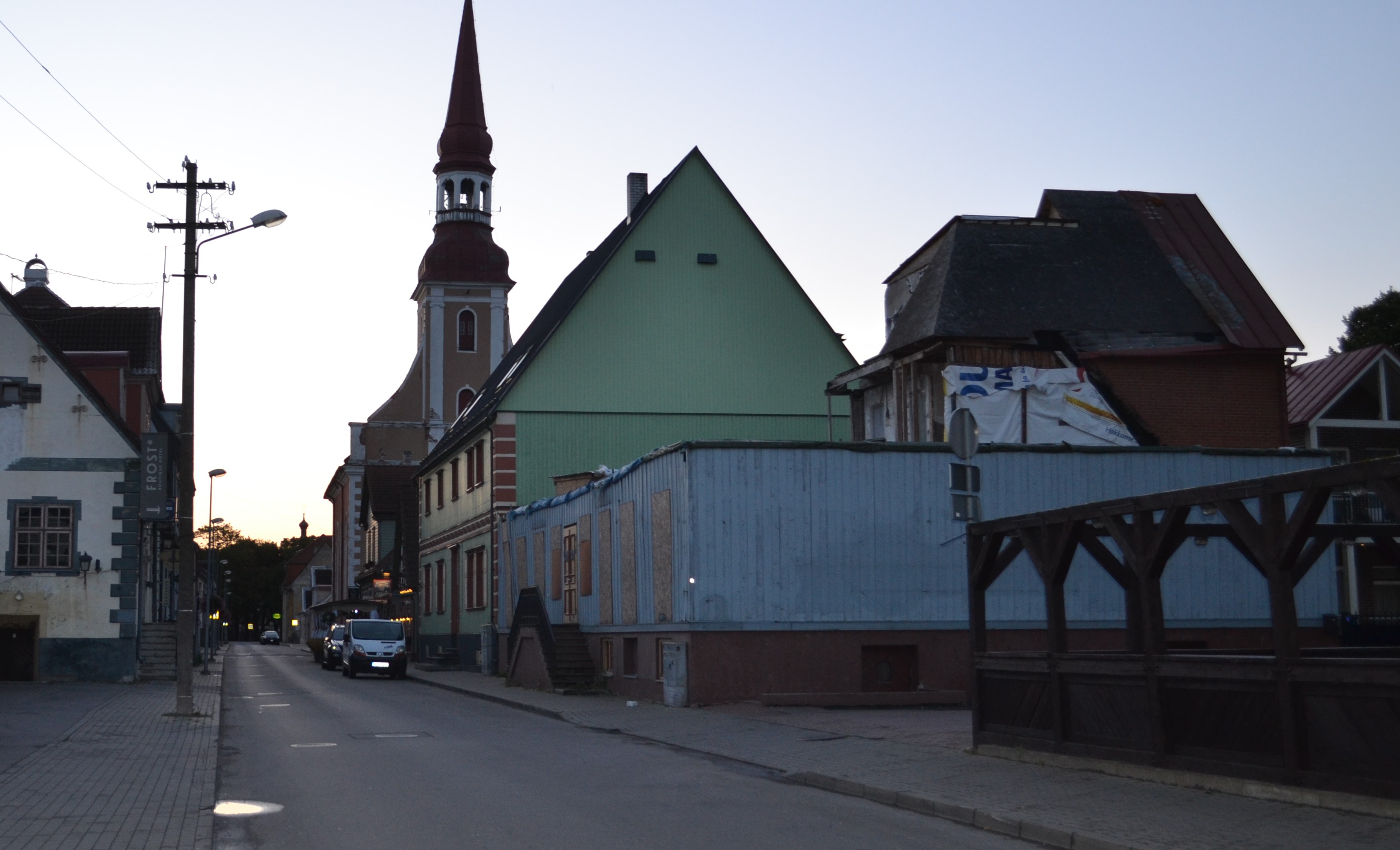 So Long Is the Road: Pärnu After Christmas

by Justin Petrone, PÄRNU
Pärnu is Estonia’s most beautiful city. Airy parks, giant trees, and castle-like villas that call out to you with their back staircase secrets. This glowing gem on the bay is the nation’s fourth largest at 44,000, although it’s hard to count heads in a city where visitor numbers rise and fall with the tides.
They call it the summer capital of Estonia, and it is. In summer it is full of tan bodies playing volleyball and you can hear bossa nova music in the cafes. But to me, the idea of Pärnu is not about summer but about escaping. People seek refuge in Pärnu, to get away from their troubles. Some go in summer to swim, others go in the spring or fall to visit the spas and to enjoy the scenery.
We almost went to stay. We looked at real estate and acquired a grand apartment not far from the beach. The plan was to live there full time, to retreat to Pärnu forever, but something happened and then it wasn’t so. So we were stuck with the grand apartment. It had wooden floors, a bathtub, and a comfortable kitchen with good light where I would type at a table.
For a while this became our writers’ studio. It was the retreat to which we escaped for weekends.
I often went alone to write. But maybe, just one time, you would like to come along with me?

Ülo is everything you expect a 75-year-old Estonian man to be. White hair, gray eyebrows, black glasses, blue suspenders. He drinks the vodka and keeps on mumbling to himself about getting that girlfriend. He thinks we should all get a few of them.
“You too, Andrus,” Ülo says. “You’re still young. Get yourself a pruut!”
“But I have a woman,” he gestures to Katrin, Ülo’s daughter.
“The more the better!” Ülo says.
“Father!”
“And you, you should get yourself a pruut, too,” Ülo tells me.
“But I have a woman,” I say.
“Pssh! That doesn’t mean you can’t have a pruut. Your naine is away in Petseri. In monastery? With a bunch of untrustworthy monks?” He raises one of those eyebrows. “And you are here in Pärnu all alone. So be a good boy and go get yourself a pruut.”
“You can go get yourself a pruut, Ülo.”
“Really? Where?” He cranes his neck around the table.
“Well, I just saw a cute girl on Rüütli Street,” I say.
“Oh yeah? What kind?”
“Blue dress, blonde hair.”
Ülo whistles.
“Just right for you.”
“Oh really? It’s settled then.” Ülo raises both bushy eyebrows. “So, where do I find her?” He laughs.
I shrug. “She was standing outside a casino smoking a cigarette. Looked about 15 years old.”
“Hey!” Andrus groans.
“Sorry. I meant 18.”
Ülo folds his hands in disappointment. Then he looks at me and raises another glass. “Oh well, boys. Here’s to girlfriends. Terviseks!”
The drunken conversations swirl through the evening. I don’t even remember the walk home in the snow, although my boots are soaked the next morning. And though I gave them my bottle of apple wine, they still refused to drink it. Out of politeness, I guess.
“We are going to let it age,” I recall Andrus saying. “We’ll save it for a special occasion. You have made your own wine, good sir. As I said, you have become a real Estonian man.”
Tõeline eesti mees.
Tõeline eesti mees. “A real Estonian man.”  This is what Andrus called me years ago when I drove from Tallinn to Tartu, even though I had just returned from an overnight flight. I drank an energy drink. In Estonia, it’s acceptable to push yourself to the limit. A “real Estonian man” doesn’t get tired, drinks good vodka, and makes his own apple wine. But such an attitude can also be dangerous. It was this same, “I can do anything” attitude that led me to try and drive home from Tallinn a summer ago after that satanic Robbie Williams concert. Unwise. If a drunk asks me if I am a “real Estonian man” in the street, then of course I say yes, and then I tell him, no, I do not have a cigarette because I do not smoke. But I know inside that I am not and will never be. I am just a happy-go-lucky loser Italian. We look good standing beside things. Make fun company. And excellent tomato sauce.
It does feel good to drink like a “real Estonian man” though.
Sometimes.
***
December 28th. Another day, another storm. The first time I stayed in Pärnu years ago there was a blizzard. I remember all the white powder on the roofs, the way the smoke curled from the chimneys. It made me so hungry. Then I walked down to the sea, as I do this morning, studied the way the boulders of sea ice lay scattered at the lip of the bay like moon rocks. Pärnu may be a provincial place, but I still feel loved here. Wanted. Necessary.
Epp texted me this morning from the monastery and asked me if I think we should keep the Pärnu apartment. I told her that it probably doesn’t make sense to keep an apartment in Pärnu if we aren’t going to use it like Andrus and Katrin use theirs. We are too tied up in other places, and if we feel the need to escape to Pärnu, we can always just stay upstairs in Katrin and Andrus’ haunted house.
She agreed. “Okay, gotta go. Five AM cave church liturgy!”
Later on, I will start packing up my belongings and begin the long journey back to Tartu. I’ll drive past Kilingi-Nõmme to Kõpu and then onto Viljandi, where I will pick up our youngest daughter from her auntie, and then at last on to Tartu. Home.
Part of my soul will stay fixed here in Pärnu though. He will wander its streets all the time that I am away. And I will have to come back and visit him from time to time just to make sure he is doing okay.

Justin Petrone is a journalist and the author of half a dozen books, including the My Estonia trilogy. He is a columnist for Postimees and has contributed to Eesti Päevaleht, Estonian World, and other publications. He also maintains the blogs North! and Itching for Eestimaa. This piece is part of his new collection, Sketches of Estonia.

“Nii pikk, nii pikk on võitlejal tee kauge kodu poole minna!” – “So long, so long is the soldier’s road to his far-away home.”

The Baltic States in a Post-NATO Environment: An Interview with Edward Lucas