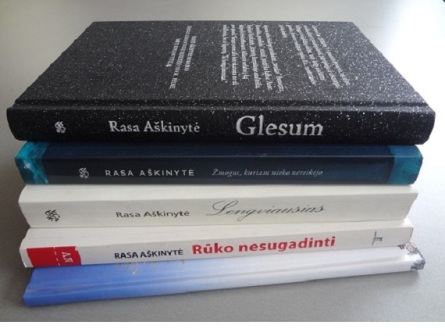 Rasa Aškinytė is one of a new generation of Lithuanian writers. She was only a teenager when Lithuania declared its independence from the Soviet Union. She began writing at the age of 35, almost twenty years after that decisive wrench that re-orientated Lithuania westward. And her writing shows it.
Her novel The Easiest, published in English translation by Noir Press, is quite different from the writing of her Soviet predecessors and from that of the immediate post-Soviet generation. On the surface, The Easiest is a light tale of love, but just peel back the skin of the story of the waitress Blanca, and you reveal a dark, bubbling mixture of existential crisis and pain. A perfect literary metaphor for contemporary Lithuania.
Aškinytė was born in 1973 in Soviet Lithuania, “in deep winter, right before Christmas”. Her father was a scientist and her mother a nurse. For the first three years of her life, Aškinytė lived with her grandparents, “in a lonely house in the middle of nowhere”, with only dogs and frogs for friends. She recalls wanting to be a nurse, like her mother, and performing operations on frogs. “Of course, they were healthy,” Aškinytė commented, “and my healing was a torture for them. I feel very sorry for that. But I sincerely wanted to help them.” She credits these formative years with shaping her emotionally. “I can spend a lot of time being alone and don’t miss people at all. Maybe because of it I don’t use Facebook.”

She speaks of her move to Vilnius, the capital of Lithuania, when she was three years old almost in terms of a trauma. There she found it “a big issue to be social”. She describes her communicativeness as a learnt process, which is interesting when considering the nature of the protagonist, Blanca, in The Easiest, whose ability to connect with those around her seems strained and unnatural.
As a child, Aškinytė’s favourite novel was Ronia, the Robber’s Daughter by Swedish writer Astrid Lindgren. The fairy-tale fancy of Lindgren’s novels seems to have had an influence on Aškinytė’s writing. Fairy tales are an important motif in The Easiest. “Fairy tales are a magical “box” of wisdom, collected over thousands of years”, Aškinytė explains. “We are unable to understand the deep layers of that wisdom, but we still feel it exists. This secret which we are unable to understand is magical, but also scary. It’s nice to add some magic to novels.
“The surface layer of fairy tales is simple, and it creates an illusion that we can understand them easily. It’s the same with everything in life – we so easily ‘understand’ what happens and why, but this understanding is very tricky. When we start thinking, we see that we don’t understand many things or anything at all; we don’t even understand ourselves. Our lives and we, ourselves, are the same – inexplicably magical, like fairy tales.”
Beyond her reference to Lindgren, Aškinytė is reluctant to talk about her literary influences. Possibly this is because she did not come to writing from a conventional angle, if there is such a thing as a conventional angle to come at writing from.
After studying history at university, Aškinytė went on to study philosophy. She works as a teacher at the Lithuanian University of Educational Sciences and at the Council of Europe. She has written an introduction to philosophy for children.
“I started to write when I was 35, which is late, I know”, Aškinytė commented. “Before, I wrote only scientific articles and never thought of becoming a novelist. But one day I decided to write, and I sat down and wrote my first novel in few months. Don’t ask me why I decided to write, or why at that moment – I have no idea. It just happened that way.
“It’s hard to know what has influenced me and in which direction. I’ve read a lot of novels, studied history, philosophy, psychology, watched hundreds of movies, travelled a lot, and met many people. The constant attempt to understand the world around me has been very important. But I think we overestimate the importance of the rational mind; there are a lot of invisible influences, which we get from our senses or feelings. Every smell, every sound or taste, the sense of fear, of pleasure or coldness, an unusual expression on a face or an interesting gesture may have a stronger influence than rational thought.”
On its surface, The Easiest seems to be a fairly naïve love story. Blanca, a waitress, works at The Paris restaurant. There she meets Alex and falls obsessively in love. However the narrative is immediately undermined by the narrator. “My name is Tom. No, my name is Blanca. My name is Blanca.” Blanca is footnoted, “names have been changed”. Throughout the novel, Blanca seems to struggle with her sense of personal identity, while the other characters are sometimes reduced to titles: ‘The Greek’, ‘Red Dress’. The other major love interest in the novel, the brother of Alex, is simply given the name Not-Alex.

“When I was 20”, Aškinytė says, “I hoped that when I was older, I would understand myself better. Now I am 43, and I still have more questions than answers. The struggle to achieve a firm sense of ourselves is endless; it doesn’t depend on your age, gender or the country you live in.
“I think the questions, ‘Who am I?’ and ‘Why was I sent into the world?’ are essential for every human being. I ask these questions a few times every day. It’s easy to ask, of course, but not so easy to find an answer. Or perhaps there is no answer to these questions at all.
“Anyway, we very often choose to ‘play’ or to ‘pretend’ instead of living sincerely. After some years of such a life we forget our ‘self’ completely, and it takes a lot of effort to regain it. Blanca was doing the same as we all do.”
Perhaps more controversial is the fact that Blanca seems to invite, indeed long for abuse. In one chapter she flirts with the notion of rape: “I don’t know about you, but I like to dream that someone’s chasing me. I run as fast as I can, so he can’t catch me, but still I can’t escape.” Rather than accepting the love of Not-Alex, she obsesses over the distant Alex. “It was Alex’s fault that I became his shadow; he put me in that situation. He never loved me; he always looked right through me, as if I were not there.” Her obsession does not falter, even when he attempts to kill her.
“She is longing for love,” Aškinytė explains. “It’s what we all do – all our lives, in every step of it we look for love. But for some reasons, in some cases, abuse is what we get instead.
“We all have a tendency to be abusive and to become victims of abuse. Why does it happen this way? Why do we stay in abusive relationships? Why do we even sometimes take abuse as a proof of love? Why do we become abusive ourselves?
“We all have little ‘Blancas’ inside us, even if we tend not to see them.”

Blanca’s desire for self-annihilation is one of the recurring themes in the novel, and in that sense it seems to be poignantly reflective of Lithuanian society today. Dubbed the suicide capital of Europe, Lithuania has the highest rate of suicide in Europe – and the fourth highest in the world. Approximately one in in every 2000 citizens kill themselves every year.
Blanca kills herself at certain point in the novel, jumping from a bridge into a river.
Aškinytė, though, denies there was anything particularly Lithuanian in this suicidal theme. “Blanca’s ‘death’ in the novel is metaphorical. Most of us ‘die’ and revive a few times in life. Sometimes it’s a metaphorical ‘suicide’, sometimes life ‘kills’ us. I don’t think it’s particularly Lithuanian – it’s the human psyche.”
Though the novel sounds dark, it is funny and light, off-beat and entertaining. It is a voice that in many ways characterises modern Lithuania, a beautiful country that struggles with its sense of self and its place in the modern world.
Aškinytė is a quirky, intelligent writer. Donatas Petrošius, Lithuanian poet and essayist, commented on Aškinytė “It’s nice to meet an author who came to literature not from the stage, not from journalism, not from the kitchen, but from philosophy. That means – she came with her mind and freedom”.
Interview conducted by Stephan Collishaw

You can find out more about Rasa Aškinytė’s work on her website. The Easiest has been published in English by Noir Press, who have also published a selection of other contemporary Lithuanian novels.
Header image: rasaaskinyte.com
© Deep Baltic 2018. All rights reserved.
Like what Deep Baltic does? Please consider making a monthly donation – help support our writers and in-depth coverage of Estonia, Latvia and Lithuania. Find out more at our Patreon page.