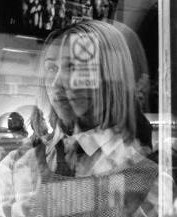 The Easiest by the Lithuanian writer Rasa Aškinytė is a story of love, of not loving and of an apartment reached only by a ladder and birds that come crashing down onto tapletops. Aškinytė’s novel is lightly and lyrically told, but beneath the surface bubbles a dark and disturbing world. Deep Baltic has this extract from The Easiest.

I know who I was in my previous lives (although I might have mixed up the order of events):
– Blue sludge.
– A flagellum.
– A flagellum again.
– A rock (I spent a good part of my life under water).
– A brachiosaurus (true, I was still in the egg. I never had time to hatch because another dinosaur devoured me; I never saw which one)
– Lightning (I enjoyed that life the most; it was short and bright)
– Australopithecus (I was one of the first to have a reticulated thumb; that’s why I could pick things up with my fingers. I died giving birth).
– A Neanderthal (I already knew how to light a fire. I don’t know if we burned down the forest out of stupidity or if the fire was caused by lightning. I only know that I died in the fire.)
– The wife of Thor (I didn’t like it one bit. You can’t imagine how hard it is being a god’s wife).
– The hammer of Thor.
– A doctor in India 600 years before Christ (we were the first to profess that health was not fated, that it could be changed through people’s efforts. I knew how to produce a large variety of medicines from plants and minerals, I had 125 surgical instruments, I could operate on the nose, the ears, breathing apparatus and cataracts, I knew how to remove stones from internal organs and how to heal broken bones. I could cure physical ailments as well as spiritual ones. I wrote a decent medical guide describing 300 surgical procedures. I classified diseases into eight categories. Despite all that, my name is unknown to history, so I’ll write it here. It was Partap Anurada).
– Two-time Olympic gold medalist runner, 4th century BC in Greece (I was killed by other glory-seekers).
– A Buddhist monk in the sixth century (from the moment of my birth I lived in a temple in Huang Yong in Korea. My teacher was the famous Wong Wang. Although in those days nobody counted years, I know that I lived for 102 years. Half of those were spent in nirvana. That’s why everyone considered me dead. When I actually died, nobody noticed and so they left me sitting under a tree until I eventually dried up and turned to dust).
– A man of a certain tribe in the seventh century. (It was a very long and cold winter that year and there was famine. While we were hunting, a bear broke my leg. My bone healed, but one leg remained shorter than the other. I couldn’t run fast any longer and I was of no use so my tribe roasted and ate me. It’s not a nice fact; that’s why I am not naming my tribe).
– An unknown poet (I wrote over 100 poems, but not a single one appealed to anyone and so I never became famous. I grew old and died of shame).
– A knight in eleventh-century Prussia. (I had a lot of land, women and I won several jousting tournaments. After one tournament, drunk, I fell off my horse. I was trampled by the horses of my fellow knights).
– A boy, the son of very poor serfs in Paris. (I died of the Bubonic plague in 1348, barely six months old. I was buried in a mass grave.)
– A slave in Ghana at the end of the 14th-early 15th (I worked in the fields. My only wages were sex with my overseers or other slaves several times a day. I can’t count how many children I gave birth to. Many died; those who survived were sold as soon as they were old enough to work; I got sick and died young.)
– A troubadour. (I was actually a woman, but to be a woman was difficult and shameful. I don’t know what I wanted more, to write or to travel, so I bound my breasts, dressed as a man and began gallivanting through Southern France until I grew old, forgot how to write, unbound my breasts and died.)
– The least favourite mistress of a Persian sheikh in the 16th (He never loved me; he never came to me at night. He was very wealthy; he had 98 women in his harem and loved them all more than me. Angry that I was an unsuitable and disobedient lover, the sheikh ordered that I be tied to a stake in the central town square and whipped so that everyone could see what happened to such as I. I baked in the sun. In a few months I would have turned thirteen.)
– A nightingale. (I admit, in a cage. It was the 17th century and the Emperor Kangxi was only seven years old when he inherited the throne. On that occasion, I was given him as a gift. During his sixty-one-year reign, I hung in his bedroom. We conferred on how to unify China, how to win obedience from Taiwan, Mongolia, Korea and how to stop the Russians. I also helped him write the introduction to the famous Kangxi dictionary. He always asked for my advice and I always responded. The Emperor understood my language perfectly. The second he died, I turned into a plume of smoke and dispersed through the bars of the cage.)
– A shaman in Buriatia. (I knew how to locate a patient’s lost soul and reunite it with its body. I got along well with the gods which was why they helped us during famine or drought. I could travel to heaven or to the depths of the earth and return again. My drums were my carriage, carrying me to other worlds. I served my people and they loved and feared me. The one time I was careless and got too close to the evil spirits, they possessed me and I couldn’t return to the earthly world. This pleased my disciple.)

– A pig. (No typo; I was an ordinary, simple pig. You can easily guess my fate.)

– Louis Pasteur. (Yes, it was I, who in the 19th century discovered microorganisms and learned that they can be destroyed at high temperatures).
– (Led by Captain Ahab, Stubb, Queequeg, Tashtego, Daggoo, the other sailors and I set out to sea in the mighty Pequod to catch the Great White Whale. As you know, he destroyed our boat and we all drowned in the blue ocean depths. But I can’t complain; it was an interesting hunt and a great voyage.)
– The son of a woman from Earth and a male creature from another planet. (This life was utter nonsense. I lived on Earth, but was a stranger to everyone. I lived several hundred earthly years because time is calculated differently on my father’s planet; they live much longer there, and we all, as you know, inherit some things from our mothers, and some things from our fathers. I encountered all kinds of problems associated with these types of situations. I could not have any close friends; I was always moving from one place to another, so that nobody would guess what I was; I was afraid of telling the truth about myself. I was afraid to admit it to myself. (I can’t say from whom I inherited this feature). I would pretend that I had a strange disease and I even believed it myself for a while. During my long life I acquired a good education, amassed a great amount of wealth, loved countless women and men, made a lot of children, but they all died before I did. Finally I grew old. I died happy and alone in an abandoned castle in Montenegro. I left my wealth to a poor, young, lonely neighbour. Neither she nor I understood why.)
– In my most recent past life, I was a female prison guard. I worked with extremely hardened and dangerous criminals. (And, yes, I was cruel. I kicked and beat them – not as much as they needed, but as much as I wanted. Nobody controlled the guards, and prisons in those days were prisons, not spas. If one of the prisoners dared to make a peep or to resist my orders, I beat her to death. I didn’t know how else to behave with them. After all they were murderers; some had killed their own children. I won’t pretend that I tried to punish or rehabilitate them. I simply enjoyed the feeling of power. I enjoyed beating them until they were pieces of meat, kicking them until they stopped yelling and then, gurgling. I remember one especially well. She asked me to pity her. Her victim had probably begged the same of her, but I doubt she heeded her. Why should I pity her?  I beat her with all my heart. There is nothing to be done about it. That’s what I was like: calm, cold blooded, and unconquerable. I died young because those conspiring bitches stabbed me. They lured me into the cellar and cut my throat. All I remember is them watching my agony and laughing.)
– I am living, now, my twenty-eighth life and I am emptiness, although I often pretend I am a person.
– In my next life I will be an electric eel. (I don’t want to be, but it’s not my choice).

The Easiest is available now from Noir Press. Check Deep Baltic tomorrow for an interview with Rasa Aškinytė.
Like what Deep Baltic does? Please consider making a monthly donation – help support our writers and in-depth coverage of Estonia, Latvia and Lithuania. Find out more at our Patreon page.