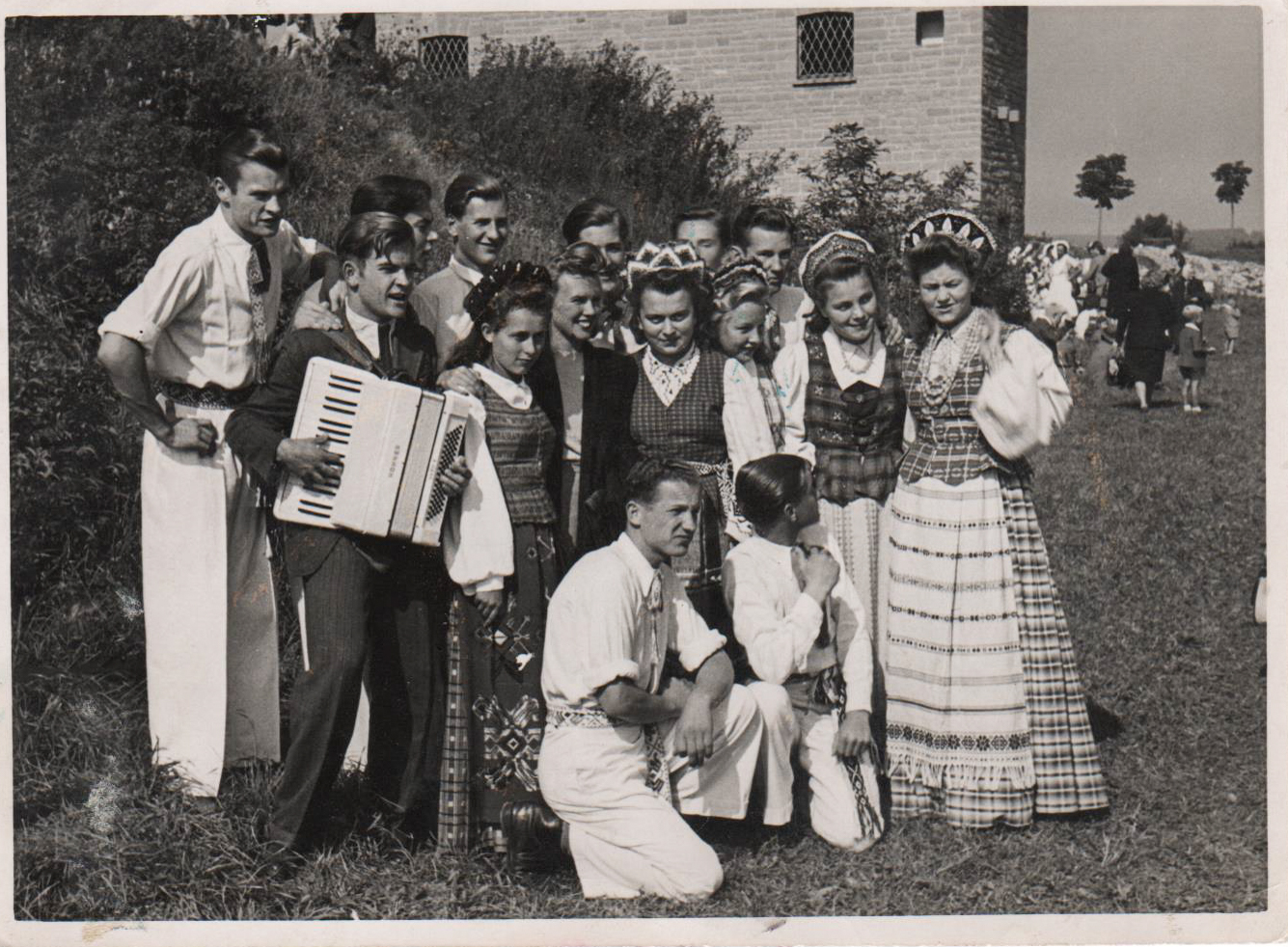 The seed for this article was sown one summer when a cousin handed me a yellowed newspaper clipping from 1951. We were supposed to be celebrating my mum’s 100th birthday but sadly she had died just five days before. However, as relatives were coming from far and wide to our London home, my sister and I decided to go ahead with the party anyway. The article had been written in Dutch by my mother for a small provincial newspaper in her hometown in the Netherlands and had been carefully preserved, probably by my grandfather. In it, my mum describes a rail journey to Wales from her nurses’ home on the Isle of Wight – she had arrived in the UK the year before and was working in a TB sanatorium there – and her attendance at very unusual event. Historically interesting certainly, but for us this article is also precious for its significance as a milestone in our family’s story.

“This festival,” wrote my mother, “is a means of promoting understanding and reconciliation amongst all the European countries who suffered so much during the War years.”

The festival concerned was the International Eisteddfod in Borth in 1951, and, although my mother does not mention this in the article, we know that she travelled to Wales to watch her future husband – my dad – perform with a Lithuanian dance group from Nottingham. This, together with an old black-and-white photo of my dad in his DP camp in Germany prompted me to delve deeper into my parents’ story and the role folk dancing played in their courtship.

My dad had arrived in England in 1948 aged 23 as part of the Westward Ho scheme, designed to allocate Displaced Persons from the British occupied zone in Germany into jobs in agriculture, forestry, coal mining and cotton textiles in the UK. He was allocated a job in the British Gypsum mines near Nottingham. From 1945 to 1948 he had been in the DP camp in Kempten in Bavaria and it was here that he had joined the folk-dancing group shown below.

Folk dancing remained a passion for him. He regularly told us about the 22 dances in the Kempten troupe’s repertoire. Like many other refugees, he saw this as a vital link to his homeland. Having arrived in Nottingham, which still today remains an important cultural centre for Lithuanians in the UK, he naturally joined the dance group and with them he attended the Eisteddfod in 1950. Some time that year he met Mum in London, and the following summer he invited her to meet him in Wales so that she could see him dance.

The importance of folk dancing as an expression of Lithuanian identity can be traced back to the end of the nineteenth century and the period of the Lithuanian National Awakening (Lietuvių tautinis atgimimas) when the country was struggling to forge its own identity in the midst of the repressive Tsarist regime, which forbade even the Lithuanian language. Like other minorities in Europe, Baltic musicians, scholars and artists were keen to explore their heritage. The first Lithuanian dance, Suktinis, was performed on stage in St Petersburg in 1903 and during the Tsarist period  choirs performing folk songs were formed – often clandestinely, as with the Daina group organised by Juozas Naujalis, which was legalised only in 1905.

During the period of independence between the wars folk dancing flourished – it even formed a compulsory part of the Higher Physical Training Course (Aukštieji kūno kultūros kursai), a course designed for sports teachers launched in Kaunas in 1934 by the President of Lithuania Antanas Smetona. The first Lithuanian folk dance festival was held in Kaunas in 1937, and featured 448 dancers. Even during the later Soviet period this event was held regularly and was generously supported by the government.

Lithuanians abroad and in exile also continued the tradition. In 1946 refugees from DP camps held a festival in Würzburg. Was my dad there, I wonder; I never thought to ask him. In 1952, Lithuanian deportees in the Siberian town of Igarka in the Arctic Circle formed a dance group. In the USA and Canada, local groups had organised smaller local events since their arrival there early on in the century.

The first major event following the second wave of Baltic immigration was held in Chicago in 1957, featuring dancers from Canada and the USA. Since then the festival has taken place every five years, with the next event scheduled for July 2021 in Philadelphia. Indeed, such is the importance of folk dancing in Lithuanian culture that, in 2003, the Baltic Song and Dance Celebrations – a common heritage of Lithuania, Latvia and Estonia – were listed by UNESCO among the masterpieces of the Oral and Intangible Heritage of Humanity.

As for the small community in the UK which my dad had joined, there is a record of a performance by a Lithuanian group, presumably from the country itself, consisting of 16 dancers and four musicians in London in 1935 at the International Folkdance Festival. But it was during the war years that the idea for an International Eisteddfod with dancers from all over the world was proposed, when Harold Tudor, an officer of the British Council, arranged a visit for members of governments-in-exile to the Welsh National Eisteddfod in Bangor. In the first years after the war, the organisers saw the event as a means of building bridges and establishing international understanding, and the festival was generously supported by the British Council and the Esperanto Society, amongst others.

As early as 1949, amidst some controversy, a German choir from Lübeck participated, and in the programme from 1951, when my parents attended, there were “spotlight talks” on the Baltic States, Italy, France and Germany along with lectures on “nationality” by Sidney Herbert and the “conflict of ideologies” by Ieuan John, both of whom at the time lectured in Politics at the University College of Wales, Aberystwyth. Ieuan John was a noted expert on the politics of the Cold War and on the Baltics in particular and in later years was a respected advisor to Western governments in formulating policy in this field.

There is a Pathé News report from the Eisteddfod that year showing the fields around Borth converted into a huge tented city, where dancers from India, Indonesia, Wales and Ukraine performed to curious British crowds. It was possible, given the austerity and insularity of the war years, that many of those watching had never met a foreigner.

Certainly a new degree of cultural understanding was needed in those early years for the recent migrants and even my parents had to contend with racism and suspicion. At the time there was considerable hostility to the new arrivals. The Daily Mirror published an article headed ‘Let Them Be Displaced,’ saying of the European Volunteer Workers: ‘Other countries had taken the cream and left us most of the scum. Some no doubt are in the Black Market. They add to our discomfort and swell the crime wave. This cannot be tolerated. They must now be rounded up and sent back.”

My own parents dealt with their fair share of animosity from some quarters. They married in 1953 and used to tell the story of how an estate agent refused to show them any properties because they were foreign, and about the priest who insisted that my dad recite penance prayers in English in the confessional before he gave him absolution! Other neighbours were more welcoming, however and my parents were both grateful that they were granted British nationality in the ’50s.

Later on in the 60s and 70s on summer trips to Sodyba [a country retreat run by the Lithuanian community at Headley Park in Hampshire in southern England] my parents always made sure we stayed to watch the traditional dance groups from all over the UK. They were run by volunteers who worked so hard to keep the community alive. Costumes were sourced from the USA, and sometimes even from Lithuania, sent by relatives who had somehow managed to bypass the strict Soviet customs system. Later on, when restrictions were relaxed in the early ’80s, those lucky enough to be granted visitor visas returned with folklore items, linen, amber and records.

And, of course, with independence came change. Now, not far from my home, new groups of dancers and musicians have sprung up, organised by Lithuanians who have emigrated recently and who have established a large community in the Barking and Newham areas. Sometimes on summer evenings, walking in a nearby park or even sitting in my back garden, I catch the wisp of a tune played on a kanklės or an accordion. It reminds me of my dad and the crackly old vinyl LPs from home he used to play on Sunday afternoons.

Special thanks to Anita Woronycz for the photos and to Meint Scheenstra who found the article.

Margaret Drummond grew up in a Dutch/Lithuanian family and now lives in London. She studied modern languages at university, taught for many years and now translates.

Absences and Reminders: Searching for Soviet Statues in the Baltics