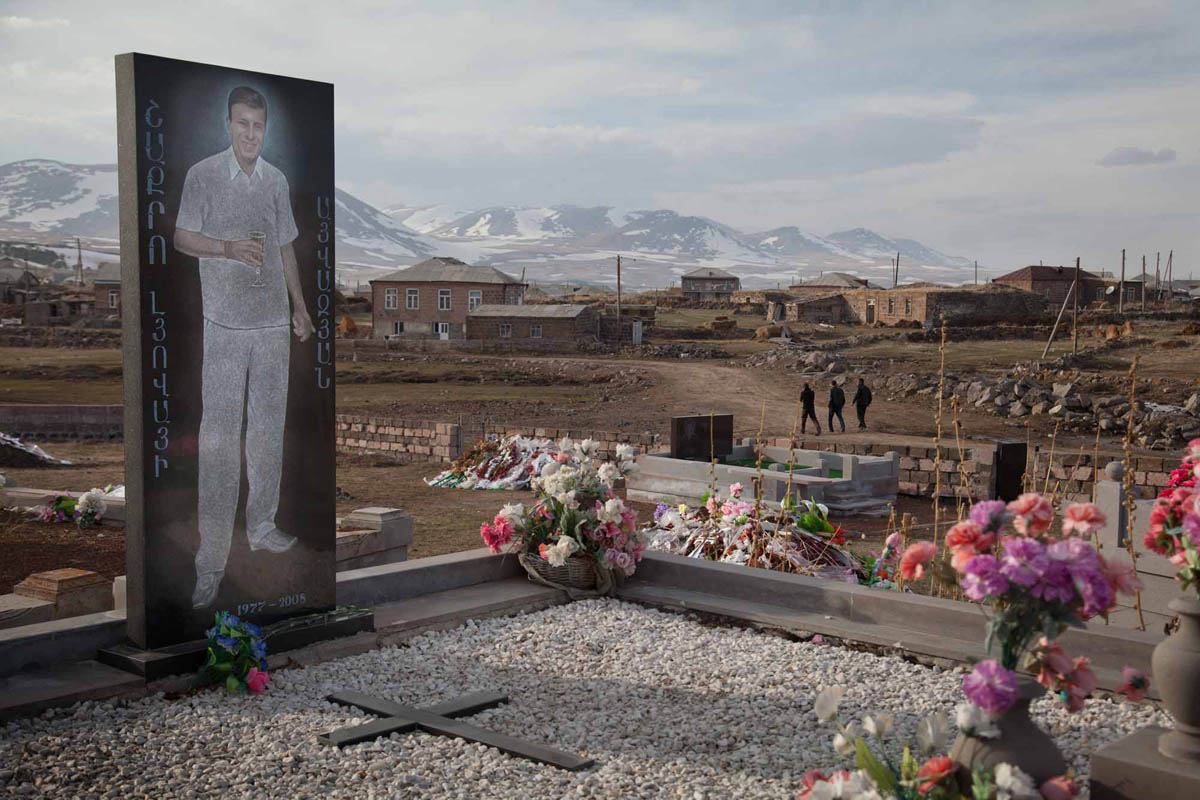 Uģis Olte is a Latvian director and screenwriter whose latest project is Double Aliens (Dubultie Svešinieki to give it its original Latvian title), a collaboration with Georgian photographer Daro Sulakauri. This is a documentary about the region of Samtskhe-Javakheti, a remote and mountainous region in southern Georgia bordering Turkey and Armenia. Samtskhe-Javakheti has a majority Armenian population (54% according to a 2002 census) and considerable tensions exist with the Georgians and other ethnic groups who also inhabit the region. Reviewed in The Baltic Times as “a view of Georgia that would otherwise have gone largely unnoticed by an international audience… the setting allows for a meditation on how we define that place we call home”, Double Aliens has been shown at film festivals in Riga and Batumi, and this month will be featured at the International Documentary Film Festival in Amsterdam.

Olte describes himself as a “playful re-arranger of images and sounds” and a “journalist-cum-self-taught TV/film director”. He has worked for a number of years on Latvian promotional films, music videos and TV programmes, but this is his first full-length documentary. Deep Baltic recently caught up with him to ask him some questions about Double Aliens and his other work.
Interview conducted by Richard Martyn-Hemphill and Will Mawhood, RIGA

What drove you to make that trip?
A craving for adventure and the male curiosity to expand the horizons of my experience. I just went with the flow of events, trying to figure out what of all this is a film and what is not.
What was the most difficult part of making the documentary?
Understanding which part of the trip IS THE FILM. Getting this itching sense of interconnectedness of all experiences of this trip into some precise sentence.

What were you trying to express with the title “Double Aliens”?
Any encounter with a stranger is a meeting of two planets. We are all aliens to each other. Every place or person you meet is a mirror that shows you alien reflection. it doubles you.
How much research did you do beforehand?
Almost none. I just found good maps that have even smaller roads. Later, in the middle of the shoot, I read some stuff, but
got really tired. And out of this “dead end” of being tired I found the theme of my film.

Do you always uses film as a means to cope with your own past? Do you still feel haunted by the past. What past exactly still stays with you?
I believe that we are not so much individuals as pieces of a long chain of people stretching both into the past and into the future. Our psyches demand needs formulated by experiences and the life stories of our ancestors. And every experience we seek is to fulfil those needs. If I am a film-maker, then it is my duty to respond to the voice that asks questions from inside. Probably all my work serves this purpose, but Double Aliens is certainly the first conscious attempt to deal with that.
How do you see the historic relationship between the Georgians and the Armenians?
Fear of the closest strangers is eternal and universal. In the Caucasus it is a bit exaggerated, because people’s blood probably circulates faster.
Why do you feel that Armenians have historically experienced so much hostility from their neighbours?
I think every nation chooses how to feel about the things that have happened to them. And based on that it lives either in the past or in the future. Armenians seem to me to be a very past-oriented nation. Like Latvians, but Latvians don’t dive so deep into this pool of histories.

What similarities do you feel exist between the situation in the region of Georgia you visited and that in Latvia?
Any place you go is a magic mirror. You can see reflections of your own world without seeing the image of yourself. When starting this film I got hooked on ceratin similatities: ethnic balance, history of deportations, violence. But with time I just stopped caring about it, because I understood that you can trigger any amount of associations anywhere you go. What matters is YOU in that strange place and what happens to you and because of you.
The landscape used in the promotional material is very striking – can you explain why this was chosen in particular?
The black patch is a sign: it tells of interaction between people and the land. Or maybe it feels like a piece of the landscape is missing or has been ripped out. Or some deadly force has landed there? Or some new seed has been sown? it can also be seen as the womb of the land – fertile and giving. This image has infinite stories inside it.

What are your influences in the Latvian cinema scene?
Anybody who strives to translate the things stirring inside to the big screen in a honest way. I greatly respect my fellow filmmakers Jānis Nords, Dāvis Sīmanis and Dainis Kļava. From the elders – Pēteris Krilovs.
How has Latvian cinema changed in the last few years?
I feel there is more and more craftsmanship. I still crave more playfulness in any genre, but I feel that this is changing.
Why do you think there has been so much less inter-ethnic violence in the Baltic states compared to the Caucasus, despite these countries also having a large number of ethnic minorities?
Nordic people are all about adaptation. Peaceful thinking is one of the best survival tools.
Do you think as a Latvian you have a different perspective on the issue, compared to a North American or Western European, for example – or a Russian?
Probably, at their core, every human being has the same view on things. But our contexts – cultural, geographical, linguistic – are those things that give unique flavours to those perspectives. That is what makes inter-cultural interaction so pleasurable. The mythological sense of the world is what both unites and separates us. Mythology, to my mind, is the most important cultural-historical context and the greatest power and ruler of all our minds. it has the same core, but it plays out in so many different ways
The tagline of the film is “a trip around the dead end”. Do you think this could be interpreted as excessively despairing – or even insulting about the place you visited?
You can always find a way around any dead end. Change your perspective and it is not a dead end any more – no matter if you look from inside or outside. What do you see the future bringing for the region you visited?
I have no idea. Either history will repeat itself or a new kind of history will be born. It all depends on how people there will feel about this world.
You worked directing the Latvian TV programme Ziemeļu Puse (Nordic Style) about the Nordic countries. Do you feel that Latvia can be considered a Nordic country? Why/why not?
Latvia is certainly Nordic. because of its geographical location. But it also benefits from having so many footprints and impacts from all cultures around. We can understand many “intonations” because of our mixed blood. But somehow we still have a strong subconscious sense of our own mentality and identity.

You’ve also made a programme about the Faroe Islands – do you think you are drawn to unusual or rarely-visited places?
The same reason as before. I want to expand my horizons and look into as many magic mirrors as possible.
What are your plans for the future?
I am editing a film about a historical event. Rock ‘n’ roll was played for the first time in North Korea this August – a clash of rock ‘n’ roll mythology and totalitarian mythology. They have a lot in common.
Richard Martyn-Hemphill is editor at The Baltic Times. His review of Double Aliens for Deep Baltic can be found here.
© Deep Baltic 2015. All rights reserved.
Like what Deep Baltic does? Please consider making a monthly donation – help support our writers and in-depth coverage of Estonia, Latvia and Lithuania. Find out more at our Patreon page.